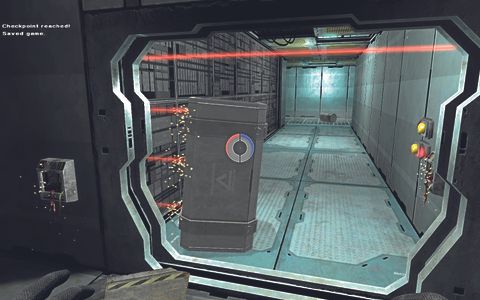 Twin Sector plays like an amateur dramatics performance of Portal. That might sound mean, but we’re actually a little bit in love with this game. A fun first-person environmental puzzler, its conceit – investigating a disaster in an underground bunker – sees you with a pair gravity manipulating gloves. The left glove can pull objects towards you, or you towards a target; the right glove fires objects away, or enables you to cushion your falls.

Puzzles are inventive and make excellent use of the limited powers, though level design is completely contrived. One early scenario has you trapped in a corridor with two rooms on either side and a button to open a high grill set in the wall. You hit the button and use either push or pull to reach the grill. On the other side, you collect the keycard and heave crates to smash the glass and open the other door. Crucially, you’re never just playing a variation on a theme. For every puzzle that repeats an element, there’s another that introduces some new way to use your powers to your advantage. A crate can be used to stand on, pummel a hole in a glass wall, throw a distant switch, or even block travelling laser beams. In your left hand it’s a puzzle block, in your right hand, it’s a projectile.

Indeed, there’s an excellent sense of progression here, a continual drip of exciting puzzles to break, which get larger and more complex, but never overwhelming. The occasional blip, when the game throws up unnecessary enemies – hideous fizzing ball things – really stands out by not fitting in with the otherwise thoughtful design. Every time they appear your heart will sink, as you try to work out how to deal with them. We eventually learnt that whacking them with a box switches them off for a short time, then using your glove to toss them will do some damage. But all too often their appearance resulted in a miserable series of escape attempts that sunk our enjoyment.

More than anything though, this is ugly. It has some of the worst voice acting you’ll ever encounter, tied to a typo-laden translation of the story, which predictably has you figuring out what’s gone wrong with a station. The trip through the bowels of the beast will tax your inner drama critic as much as your brain. It’s so bad you expect the sets to wobble, or the MST3k robots to pop up and start throwing insults. In a world with polished gems like Portal, Braid, or World of Goo, Twin Sector is a real and disappointing throwback.

We’ll recommend it, however. Warts and all. It’s engaging and well-designed, and happy to break its own world to make a better puzzle. It’s conceptually all over the place, but it is a great indie puzzle game.