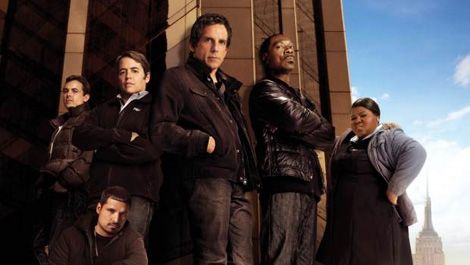 Brett Ratner’s credit-crunch caper begins in a blur of hyperactivity.

Kovacs says things like, “Walk with me!”, as Ratner whizzily introduces the rest of the ensemble. Indeed, so primped, primed and efficient is this opening it looks like we’re in for a textbook farce.

We’re not. Shaw, it transpires, is on the make, gambling – and losing – the staff’s pension funds. After a (welcome) moment of madness involving Shaw’s prize possession (Steve McQueen’s sports car) and a golf club, Kovacs, his concierge (Casey Affleck) and the bellboy (Michael Pena) are sacked and plot revenge.

Here begins the caper part of Tower Heist – by far the movie’s best stretch - which sees the gang, plus a Wall Street whizz (Matthew Broderick) and an actual thief (Eddie Murphy, back on badass form), planning the titular take-back.

It’s got everything a comedy needs: space for the characters (and the audience) to breathe, good lines (“I never saw an episode of Matlock where the criminal fucks Matlock…” is the verdict on Kovacs’ relationship with investigating officer Téa Leoni) and the pleasure of watching a marquee cast amiably goofing around…

It doesn’t last. For the final third, we’re back on Ratner Time, with each potential laugh or left-turn feeling more contrived than convincing.

Everything’s so rigorously over-controlled it leaves looser moments, such as when Leoni gets riotously drunk, playing like comedy stand-outs rather than charming asides, and that just shouldn’t happen with players this talented.

Most of all, you wish that Kovacs would let go and “do a Nicholson” on a few more supercars – because this is one shiny star vehicle that could really use some scuffing.