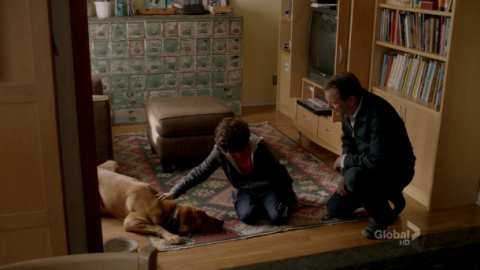 THE ONE WHERE Martin and Jake wind up investigating an attempt on a journalist's life when their car breaks down in Martin's old home town.

VERDICT You'd be forgiven for having missed this episode of Touch , airing as it did in the middle of the show's hiatus (it doesn't actually return until 26 October) with barely any fanfare or pre-warning whatsoever. We don't know why it didn't air as part of season one: perhaps it was merely the unlucky 13 th episode that they had no room for, or perhaps they decided to leave it out of the season because it's so thematically different to the rest of the year. We suspect, however, that the real reason it wasn't aired was because it's as bland as half-cooked toast.

It's definitely a curiosity, as though the writers were struggling to see what would happen if they wrote an “easy” episode instead of one of their usual ones filled with interconnecting plotlines. It's also almost completely bereft of the numbers that Jake uses each week; even when we do see them (67) they barely amount to much. This means that “The Road Not Taken” isn't a real episode of Touch : it's more of a straightforward mystery show featuring Martin investigating a problem and putting the clues together himself. Hell, Jake's barely even in it, although there is a lovely scene where he strokes a dog.

Basically it's a take on Erin Brockovich with a tiny twist, with Martin hanging out at his old local newspaper during rumours of there being trouble at the local factory. We get to meet his old boss Henry (woohoo!) and some woman he used to work with (woohoo!) and, er, some guy at a garage who's a bit grumpy (woo... actually, let's stop trying to make this sound exciting).

Meanwhile the subplots barely connect at all – a bad example of the show forgetting it's called Touch . The main one features a woman grieving over the loss of her baby which, despite the actress's best attempts to inject life into her plight, is almost insultingly flimsy. The other features a geeky boy, dressed like a Hobbit, setting off on a quest in a forest – again, there doesn't seem to be any point to his story, unless it's merely there to make real geeks wince at how crap he is. And at one point there's also some lady who finds the phone belonging to the Japanese girls, so she calls a DJ about it. Big whup.

While Touch can be wonderful at times, it can also be infuriatingly slow and dreary, and this is an example of the latter with some added Valium. However, it also serves an entirely accidental purpose: it shows us how dull Touch would be without the intrinsic spirituality at its core. Take that out and you're left with nothing except Kiefer Sutherland saying “Dammit!” a lot. Give us Jake and his beautifully magical numbers any day.

TITLE “The Road Not Taken” (the name of a poem by Robert Frost that’s as much part of the American zeitgeist as Ichabod Crane, The Catcher In The Rye , the Gettysburg Address and Republican leaders making tits of themselves) is one of TV’s most popular episode titles with TV.com listing at least 13 other shows that have used it, including Stagate SG-1 , Fringe and Highlander .

GIRL POWER! The Japanese girls help the grieving mother when she faints while taking their picture for them. We're actually starting to think these ladies need a show of their own – the action always comes to life when they're around!

CRINGE OF THE WEEK The geeky boy records a diary message to himself and begins it with the words “Quester's Log”. Just... no. Really.

WORST BIT The grieving mother discovers she's pregnant in a plot twist so well signposted you'd be able to find it on an AA roadmap. Also, because we're being a bit pernickety here, in the real world we doubt her getting pregnant again would solve all her problems. She gives a big speech about how, if she moves to Paris with her husband, she'll have to pack up her dead child's possessions and she doesn't want to... but we don't get to see the outcome of this. We're left thinking that another pregnancy makes her grief magically disappear – not very convincing. (And possibly even a little insulting to anyone who's lost a child; that's the problem with writing such a shallow subplot...)

BEST LINES
Martin (about Jake): “He doesn't talk.”
Henry: “It makes a big improvement over you.”