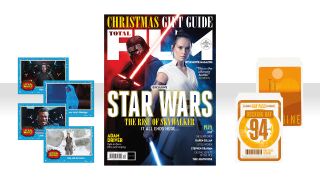 Total Film is the smarter movie magazine. Originally founded in 1997, it is now recognised as one of the most-respected voices in cinema. A Total Film magazine subscription is your access-all-areas pass to the world of movies. Passionate and authoritative to the last, our writers are as excited about the latest tentpole blockbusters as Oscar bait, arthouse masterpieces as hidden gems, delivering cheeky, irreverent, probing reviews, interviews and features, issue after issue.

Each month, we scour the globe to bring you industry news, A-lister interviews, first-look features and stills, and insider on-set reports from the full spectrum of the world of film. "Total Film has always been as passionate about movies as you are", says Total Film editor Jane Crowther. "We want to watch - and discuss - EVERYTHING. We get you on the set and in the know of all the hottest films, chat up Hollywood's most interesting stars and keep you ahead of the curve on the coolest projects in production. Plus, we also deliver the most honest and reliable reviews in the business - and we will never give high star ratings to our mates." Here are some of the many reasons you'll want to take out a Total Film magazine subscription today.

In every issue of Total Film magazine you'll find: