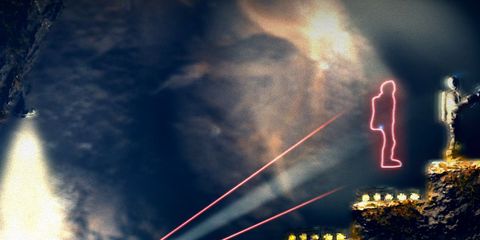 Few games tackle the type of heady subject matter that the The Swapper does. Like the best science fiction, Facepalm’s puzzle-platformer uses its sci-fi trappings to create a tale that reflects decidedly human concerns, dressing its narrative up with an atmospheric setting and some very clever play mechanics. The end result is one of the most engaging and thought-provoking gaming experiences of the year, one that fans of indie and puzzle games alike shouldn’t miss out on.

On the surface, The Swapper bears more than a passing resemblance to the Metroid series. Like Nintendo’s seminal franchise, the game is set aboard a twisting, derelict space station punctuated by atmospheric sounds--the scrape of metal, the crackling of a nearby mechanical fire--and the occasional haunting melody, which drifts in and out of your speakers like an apparition. You’ll have to navigate these labyrinthine corridors, acquiring items to gain access to new areas of the station and unraveling the mystery of its fate from the logbooks left behind by its former crew.

Peer beneath these surface similarities, however, and you’ll notice just how startlingly original The Swapper really is. You may be exploring the wreckage of a doomed space station, but unlike Nintendo’s famous bounty hunter, you won’t be acquiring power-ups and using their attributes to work your way through it; you start the game off with everything you need to conquer its challenges, and it’s up to you to figure out how to manipulate your innate abilities to solve the devious puzzles set before you.

This is done primarily through the game’s core gameplay hook, swapping. The Swapper derives its title from the special device you carry with you throughout your journey, which allows you to create up to four clones of yourself and swap your consciousness between them, provided they’re in your line of sight. Each one of the game’s challenges revolves around this conceit. Early puzzles will have you using your body doubles in fairly conventional ways, conjuring up one clone to stand on a switch while you transfer control over to another to pick up an orb (the items you need to gain access to deeper parts of the space station). But before long, the puzzles you encounter become far more intricate.

The Swapper gradually introduces new wrinkles to the gameplay as you make your way through the wreckage, adding another layer of complexity to the challenges; blue and red lights, for instance, prevent you from creating clones and swapping between them, and later areas even introduce gravity pads that flip you upside down, allowing you to walk along the ceiling. The game stacks these elements together to create some truly mind-bending puzzles, and you’ll have to use a great deal of lateral thinking to overcome these restrictions.

In fact, the deeper you delve into the heart of the space station, the more maddeningly difficult its challenges become. There will be times when you hit an impasse because the solution to a problem wasn’t particularly intuitive, and it can get frustrating when a certain puzzle requires you to line up several clones at once and time their movements perfectly, only to go through the whole painstaking process again when you make the slightest error. The Swapper will tax your wits like few other games, but the sense of satisfaction you feel after working out the solution to a tricky problem is beyond compare, making these momentary frustrations worth it in the end.

The game also uses its gameplay hook to raise some interesting questions about the nature of consciousness and the morality of your device. Like in Metroid Prime, the narrative in The Swapper is doled out in bits and pieces through computer logs scattered about the space station, and they come together to reveal a grander narrative lurking beneath your actions. By the end of your journey, you’ll be questioning whether or not the clones you created (and sacrificed in the name of progress) are simply projections of yourself or something more. It’s a fascinating idea that plays brilliantly into The Swapper’s gameplay mechanics, creating a cohesive and unforgettable game experience.

The Swapper is a clever, engaging, and focused puzzle game, one that will test your wits and leave you questioning your actions. With a unique gameplay premise that is explored to its logical ends, both in terms of the problems you’ll be solving and the narrative wrapped around them, and a stunningly atmospheric backdrop, The Swapper proves to be a satisfying and thought-provoking adventure that all puzzle fans will enjoy.