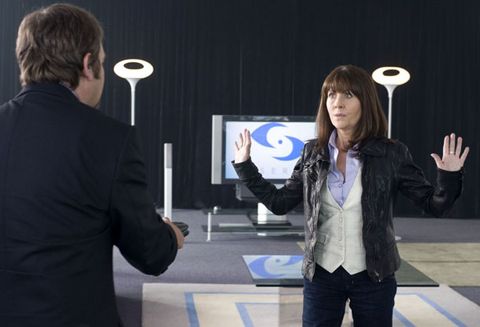 She did it her way

THE ONE WHERE Computer whiz Joseph Serf is about to unleash his new machine on the world – but Sky and Luke twig something’s not right with him when he “glitches” in front of them.

VERDICT “The Man Who Never Was” is an episode overshadowed by the fact that it is the very last Sarah Jane Adventure . Whatever happened in it would always be secondary to the fact that this fine children’s drama has come to a premature end due to the sad and unexpected death of its star.

For what it’s worth the story is full of fun, whether it be Sarah Jane’s interview with the holographic Serf, the Jawa-like aliens who make Serf move around, Numbskulls-style (how they’d love to upgrade to a Teselecta) or “Clani” pretending to be husband and wife to get into the launch. It’s all delightfully daft.

But it’s the closing moments we’ll remember most, a brief montage of Sarah Jane action, which includes a hug from Doctor Ten and ends on a poignant shot of Elisabeth Sladen with tears in her eyes. For me, the most emotional moment was actually the sequence before this, when Luke has decorated Sky’s room for her, indicating that this episode was actually meant as a new beginning, a proper bedding in of a young character, most likely introduced because the show’s makers could see it as a show with a long future. Terribly sad.

BAD TIMING Was it slightly unfortunate that this episode first aired (on CBBC) a week after the death of Steve Jobs, surely the inspiration for Serf?

DID YOU SPOT? The saucy little gag when Mr Smith puts Luke’s message up as “Clani Grab Harrison’s Pen.” Clyde remarks that he’s never been so glad to see a full stop. Hah.

FINAL CAPTION ON SCREEN: “And the story goes on… forever.”

Read our other reviews of The Sarah Jane Adventures