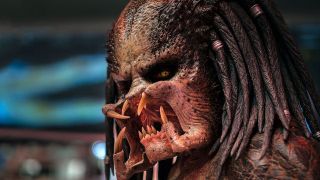 Adding a new entry into a movie franchise with 30 years of history is no easy feat. How do you make the old feel new, how do you keep tension high, how do you up the stakes? Considering these challenges, perhaps it's no surprise that Shane Black's The Predator falls short of being a worthy sequel to the 1987 classic. But there's one tiny change, one small tweak, that could've redeemed the whole film - or at least its final few minutes. Warning: Spoilers to follow.

First, let's recap what actually goes down in The Predator. We open with two Predator ships flying through space, one firing on the other. The ship that's under attack opens a portal and appears above Earth, crash-landing on the planet's surface shortly thereafter. We later learn this Predator is considered a "traitor" by some back on its homeworld, and at the very end of the film it's revealed this renegade was carrying something on its ship, which the humans in the film translate to mean "Predator killer."

After some dramatic tension, the pod carrying the "Predator killer" is opened, and a small device emerges. It suddenly flies forward and latches onto the forearm of a scientist in the room, quickly covering his entire body in Predator-style armor. Only like, way cooler, 'cause this one has six shoulder cannons and red eyes and spikes and... okay, basically it's like the original Predator design, but drawn in a 15-year-old's high school notebook.

Our hero says; "That's my new suit," roll credits. The implication is pretty clear: a theoretical sequel would likely have humans take the fight to the Predators by way of this new technology. But what if there was a better "Predator killer" waiting in the wings all along?

The idea of a crossover between the worlds of Predator and Alien goes back to the early '90s. You probably already know about the Easter egg showing a Xenomorph skull in the trophy room at the end of Predator 2, but what you might've missed out on was a comic book series published by Dark Horse, dubbed (what else?) Aliens vs. Predator.

While the idea was popular enough to merit a plethora of spin-offs and even a few novels, it's the very first arc of the original series that represents a missed opportunity for Shane Black's sequel. In that story, a group of Predators arrive on a planet, ready to complete their first hunt against a group of Xenomorphs. If they succeed, they'll be accepted as full-fledged hunters in Predator society. It's basically a bar/bat mitzvah for Predators!

The 25 best action movies to get your adrenaline pumping

Unfortunately, the Predators soon discover that the planet has been colonized by humans since they last used it as a staging ground for this rite of passage. A mutiny occurs when the uninitiated Predators decide to go after the settlers, and the leader ends up siding with the humans thanks largely to Dr. Miriam Revna and her friend Machiko Noguchi, who save his life. Some drama and a few chase scenes later, Machiko and the Predator leader successfully evacuate the surviving humans and kill a Xenomorph Queen.

Impressed by his human compatriot's fighting spirit and following the Predator code of honor (a concept much more thoroughly explored in the comics than in any of the films), the leader brands Machiko with his clan's symbol, marking her as a warrior to be respected.

Two years later, more Predators arrive and adopt Machiko into their society. Over time, Machiko learns much of Predator culture and fighting techniques, eventually getting her own suit of armor. Despite this, many Predators look down on Machiko, and she eventually leaves the clan when they organize another hunt on humans.

See where I'm going with this?

What if the "Predator killer" was a person, not a thing?

So let's rewind and imagine how things could've gone down in the recent flick. The epilogue begins to play out as normal, but this time, instead of a suit, the pod opens and reveals a female human wearing Predator armor. She opens her eyes, maybe says a quick line to let us know she either has a mysterious past and/or is ready to kick some Predator ass, fin.

Now you've got a cool nod to fans who know that she's supposed to be the film version of Machiko, a cliffhanger setup for a sequel, and a new character unlike any we've seen in the films so far. While I'm not saying the rest of The Predator worked particularly well, you literally don't need to change anything other than what's in the pod to make this work, and the benefits so drastically outweigh the cons.

Yes, this does introduce a lot of questions, such as how'd she get in there, how'd a human become part of Predator society, why was the Predator carrying her in its ship, etc. But cliffhanger endings can work, provided people want to hang onto said proverbial cliff. Think back to Kill Bill, Vol. 1 - the story still works as-is, but knowing The Bride's child is alive at the end gets us excited as we wonder how Uma Thurman's anti-hero will handle the news. Or more recently, the Marvel post-credit scene format.

Speculation about who Machiko is and why she's a human designated as a "Predator killer" are far more interesting and fun to think about than "What's the Army guy gonna do with the 'Predator killer' suit," especially when we pretty much know the answer is "kill Predators."

The Predator is full of ideas, but relatively few of them feel very new. Group of tough guys, check. Big space hunter out to kill them, check. Extended sequence where our heroes (and maybe a few others) get taken out one by one, check. These have been the formula for every Predator movie to date, and making the space hunter bigger clearly isn't enough to keep things interesting.

If we're going to keep the Predator franchise going (an increasingly unlikely prospect, given The Predator's tepid reception), it needs something truly new. Machiko could've heralded that change, and given us insight on Predator culture in a way we've never seen before - at least not in film. Instead, we got a surprisingly by-the-numbers Predator story and a knock-off Iron Man suit. We deserved better. We deserved Machiko.

Find out what else is hitting cinemas this year with our breakdown of the best upcoming movies of 2018 and beyond.