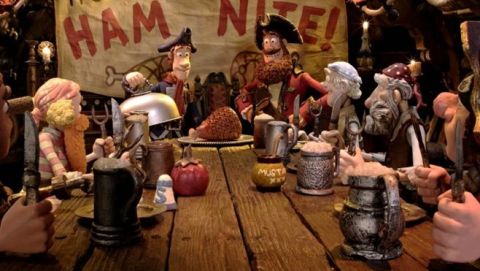 Between Somali pirates, online pirates and Johnny Depp, there wouldn’t seem to be a gap in the market where crossbones and cutlasses are concerned.

But, apparently, they didn’t get that memo over at Aardman, where they’ve spent the past five years arduously turning the first in Gideon Defoe’s book series about comically crap buccaneers into one of their trademark stop-motion opuses.

With loving craft and meticulous detail, they’ve ended up creating a veritable treasure trove that, like Wallace and Gromit’s escapades, boasts a constant barrage of verbal and visual wit.

Yet it’s never particularly funny, the gentle buffoonery on display being likelier to induce genial chuckles and smiles of appreciation than out-and-out, sidesplitting belly laughs.

Central to Peter Lord’s Adventure is that very British combo of crippling insecurity and cringing embarrassment Hugh Grant has been lucratively mining for the last two decades.

He’s ideally cast then as the follically unchallenged Pirate Captain, a second-tier brigand who languishes in the shadow of cockier corsairs like Black Bellamy (Jeremy Piven), his swaggering American nemesis.

A chance to redeem himself arrives in the form of Charles Darwin (David Tennant), who politely informs the Captain while walking the plank that hispet parrot Polly is actually a dodo.

Cue a trip to London to make booty of the bird, even if it means incurring Queen Victoria’s (Imelda Staunton) wrath – who loathes pirates almost as much as Hugh hates tabloid hacks.

After half an hour setting up its kooky, U-cert universe, Scientists! hits its stride at the mid-point with a breakneck chase in a staircase-surfing bathtub that drolly recalls The Wrong Trousers ’ model-railway finale.

By the hour mark, though, an inertia has set in that not even Queen Vic doing ninja flips on her giant floating fortress can dispel. Only Aardman would think of pinning a Blue Peter badge on a pirate hat or adding a cameo from Elephant Man Joseph Merrick.

Yet it soon becomes evident such ingenious grace notes are embellishing a slender concept that, while perfectly suited to a half-hour short, struggles to sustain a full-length feature. Essentially Captain Pugwash on a bigger budget, Pirates! proves good will and artistry only go so far.

That said, it’ll be worth a case of doubloons to anybody with little ones to entertain over the Easter hols.