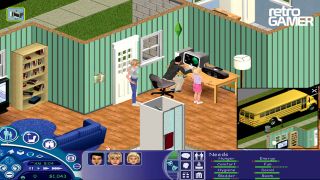 It's surprising to consider that The Sims – the best-selling PC franchise of all time – nearly wasn't made. Its creator, Will Wright, had a battle on his hands as he tried to develop the idea, and no one at Maxis shared that vision. It was, in Wright's own words, "a struggle". But, it was something he wanted to play, and he knew that others must feel the same; they did about SimCity after all. But, how did such a unique concept for a video game – namely the manipulation of tiny virtual people and their everyday lives – come to be?

"I was always interested in architecture and architectural design," Will Wright explains, "and after SimCity I started thinking that I wanted to do something that was more around designing structures. So originally, it was more meant to be an architectural version of SimCity. As I went down that path I started thinking I needed some way to 'score' what it was that you were building, and so I knew I needed little people living in these structures that you were designing. I spent a lot of time thinking about how to make the behaviour of these people very robust, interesting and plausible no matter what kind of environment you put them in."

Creating these tiny people – AI characters that would interact with the structures built within the simulation – took about two years of Will's life, in between a variety of other projects. SimCity had become a huge success and, as a result, Maxis had a little freedom to create ideas that it wanted to see made. For Will Wright, that would end up being The Sims.

How The Sims was made

"It turned out that controlling the little people was actually more interesting," recalls Wright. "It was still fun designing houses for them, but controlling their lives actually turned out to be far more compelling, so the whole project took a turn towards the people. I kept the architecture tools in there, but then I just really started focusing more on the people and objects and their behaviours and relationships – all that sort of stuff."

But Maxis wasn't convinced. Though Wright detailed the project and what he hoped it would be, the company was nonplussed; why play a game about emulating real-life when video games could help us live out our wildest fantasies? "When I was describing it to them [Maxis] – even with the focus on the people – they were hearing a game about taking out the trash and cleaning out your bathroom and it just doesn't sound very interesting to them compared to saving the world or flying a jet fighter."

Wright persisted, however, knowing it was something he needed to make. "But I kind of understood that people are fascinated with people," he says, "and I knew it was interesting to me and I kind of had to fight for it internally. At first, nobody was behind the project. We had some programmers who were in a tool group that we weren't using really so I turned it into a Black Box project on my side and said 'can I have these four programmers', and nobody really cared so they said 'yeah'."

It wasn't just his fellow developers that he had to convince either, with the game concept that would turn out to be one of the most important PC games of all time struggling to even appeal to focus testers in the earliest stages of development. "We even did a focus group back in, I think, '93," states Wright, "where we were focus testing about five different game concepts. I remember [with] the other four the focus testers said 'oh yeah, it was pretty good, we would play that', but when it came to The Sims and we were describing the idea to them, they were all universally like 'oh that's such a stupid idea, we would never play that, we hate that idea'. It totally bombed in the focus group."

On its 20th anniversary, Edge Magazine reflects on how developer Maxis created an iconic living snapshot of '90s America in The Sims

Wright always believed in the concept, however, and with his secret team of programmers he set about creating an early part of the simulation. He admits now that "it's hard to envision something like The Sims when you can't play it and you can't see it", adding that it's always difficult to really sell any idea forged in the back of a designer's mind. It was hard for others to really 'get' what The Sims was meant to be.

"In my mind I had this concept of what it would feel like, but to expect somebody else to understand and have that concept, it's a hard thing. And I've been in the same position before, where somebody told me some idea they had and I just didn't get it and it sounded kind of stupid. I know the guys who made Myst and they were showing me one of the early versions and I was like 'what is this? It's just a slideshow', but once I saw the final version I played it and loved it. But when they were describing it to me in the very early stages I just couldn't wrap my mind around it."

As development went on it was clear that Wright needed to flesh out these ideas, and the key way to highlight what it was all about was through these virtual characters. The Sims themselves were caricatures of real-life, representatives of what we might look like to an almighty being capable of a higher level of thought. Quaint, simple perhaps – but entertaining all the same. While part of this was down to the limited resources available at the time, there was also a conscious decision to keep the Sims sub-real, to create a real impression of people but to ensure that it was enjoyable all the same.

"We understood that at some point we wanted a certain level of abstraction," Wright tells us. "Part of that had to do with the amount of detail that we were able to go into in the simulation. I always thought of it kind of as a human flocking simulator. The level of behaviour that I figured we could achieve was like if you were to look out of a balcony window and see people down on the street you could probably get a sense of when they're shopping, when they're arguing or some level of understanding their behaviour but not necessarily every little detail. And that was the target for me, to try and simulate these characters at that level."

Even Simlish, the iconic language that your virtual characters spoke in-game, was purposely chosen to enable the player's imagination, to represent the idea of real-life and not to mimic it. "One of the key decisions was the fact that they wouldn't actually be speaking English, that we would actually have them speak their own language. This is one of those situations where the computer is pretty good at simulating certain things and really bad at simulating other things."

"We could have had them speaking pre-recorded lines or something like that, but it would have destroyed the illusion of reality pretty quickly just because we couldn't provide that level of AI," he continues. "By having them speak this kind of gibberish, your human imagination actually fills in the blanks and will imagine the conversation. That's really an example of us offloading a portion of the simulation to the human imagination – the portion that the computer is very bad at."

But how did Wright set about creating a whole new language? Initial tests focused on more exotic languages as he tried to hone in on the sound of The Sims. "We actually had some Ukrainian programmers working for us and I tried recording some of them speaking Ukrainian and it was a little too obviously slavic, and then I started experimenting with different languages. Navajo was nice but we couldn't find any Navajo voice actors. Estonian was very interesting because Estonian is very hard to locate. It sounds interesting, exotic and like a real language but you can't really associate it with any geographical area – but we only found one Estonian voice actor. And eventually I found these two improv voice actors; they came in and we described to them that we wanted something that sounded like a real language but not really. Together they kind of developed what later became known as Simlish."

Most would recognise a conversation in Simlish if they heard it, and a large part of that is its iconic – and unique – approach to language. As it turns out, The Sims was a pretty big success, most notable for its ability to attract people who weren't otherwise interested in games. Sisters and mums were jumping in to try out games for the first time, an unusual occurrence in a medium that was, at the time – primarily, at least – the bastion of teenage boys. "I was actually kind of surprised," says Wright of The Sims' success. "I figured The Sims would either be a pretty big success or a miserable failure, I didn't think there was going to be a lot of in-between. Really, the key to it was getting players into the right mindspace of seeing this game as something that was more creative and about exploring and a little less about winning."

The Sims was released in February 2000, and two years later it had notched up over 11 million sales – the reach of video games had officially grown to a much broader group of players. Worldwide, the franchise is estimated to have surpassed $5 billion in lifetime revenue, and the original game accounts for a large percentage of that. For good reason too, because even now – 20 years on from its original release – the appeal of The Sims is still as powerful and persuasive as it has ever been.

It has been long speculated that Maxis is hard at work on the development of The Sims 5. While little is known about the project, one this is for certain: that the foundations that Will Wright laid 13 years ago have an everlasting appeal that is unlikely to disappear, and will no doubt be at the core of any games bearing The Sims branding that may arrive in the future.

Save up to 57% on a Retro Gamer magazine subscription bundle and have the best retro gaming features and interviews delivered to your door each month.