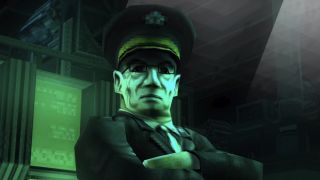 The US Presidents have been kidnapped! Which ones, you ask? All of them. Are you a sneaky enough dude to rescue the Presidents? That's the setup for Never Stop Sneakin', an action/stealth game from Dean Dodrill that lampoons and parodies games like the Metal Gear Solid series. And let me say, the trailer's humor is on point.

While the story and characters seem like they were ripped straight out of MGS (particularly that dastardly Vice President Helicopter), the gameplay seems more reminiscent of Hotline Miami mixed with a bullet hell. Dodrill was also the creator of the excellent Dust: An Elysian Tail, so it's safe to assume a good amount of action.

"I had several goals I wanted to accomplish with my sophomore effort as a game developer," Dodrill tweeted about the game. "I wanted to try something in a completely different aesthetic, and go fully-polygonal in the process. I wanted to create something procedural and infinitely re-playable, and design engaging combat with the simplest controls possible. I think I've accomplished these things, and it's been a thrill to create something completely different from Dust:AET."

Alex Kain, who served as co-writer on Dust (as well as lore writer on Salt & Sanctuary and Armello), will handle the story. Jason Marnocha, Marianne Miller, and Arin Hanson (also known 'round the web as Egoraptor) provide voice work. That's particularly fitting for Hanson, who gained a ton of notoriety after making this gem of the mid-2000s internet: