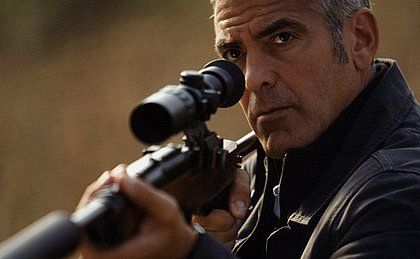 Put Melville's Le Samourai, Bertolucci’s The Conformist and Antonioni’s The Passenger into a big movie blender and you get The American, a stylish throwback to the existential crime thrillers of the ’70s.

Directed by Anton Corbijn (Control), it’s a thoughtful, solemn character study that casts a mesmeric spell. Until the end, that is, when – instead of delivering the dramatic climax we have been led to expect – it takes an abrupt nose-dive into laughable pretentiousness.

Clooney is Jack, a melancholy hitman who – having survived an assassination attempt in snowy Sweden – takes refuge amid the cobbled streets and medieval architecture of Abruzzo, Italy.

Befriended by a philosophical priest (Paolo Bonacelli) and serviced by a kindly hooker (Violante Placido), he starts to contemplate a change of career. But when he’s called upon to build a rifle for another killer (Thekla Reuten), it becomes clear his old life will be harder to walk away from than he imagines.

It also takes pleasure in depicting Jack at work. His painstaking assembly of a firearm, a silencer and mercury-tipped bullets show him to be as much a craftsman as he is a skilled executioner.

Gradually, the affectations of Rowan Joffe’s script – a recurring butterfly motif, for instance, or laboured nods to Jack’s outsider status – become too jarring to ignore.

There’s an admirable conviction to the film’s austerity and formality, and it’s courageous of the Cloone-meister to so rigidly suppress his natural charm. But the overall lack of humour practically dares the audience to provide their own.