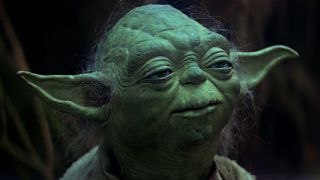 Mystical monks turned warrior politicians, the Jedi are responsible for guarding peace and justice in the Star Wars universe, but they also look positively kick-ass when wielding a lightsaber or blowing shit up when the time calls for it.

Browsing over the menu of a total of seven Star Wars films and two TV shows (sorry, we're going to need to see The Last Jedi at least 287 times before we can figure out our favourite scenes from that one), our sister publication Total Film magazine selects and celebrates the Jedi's finest moments. The Force is strong with these scenes…

In testing young Anakin’s suitability as a potential Padawan, Yoda reveals a step-by-step guide for becoming a Sith: “Fear is the path to the Dark Side. Fear leads to anger. Anger leads to hate. Hate leads to suffering.” He wasn’t wrong.

Luke Skywalker is minding his own business in the Mos Eisley cantina when  a customer with a face like a baboon’s arse takes exception to his presence. “He doesn’t like you,” his compadre explains. Ben tries to make peace but the bullies aren’t placated. Before they know it, one of them has lost a limb to Obi-Wan’s lightsaber. Now that’s how you disarm an assailant…

18. Obi-Wan vs. General Grievous - Revenge Of The Sith

What’s better than two lightsabers? Five, obviously. Giving the wheezy droid leader an extra pair of arms makes the Obi-Wan showdown look like three fights in one. It’s a handful of bearded midi-chlorians versus a rolling robot fan of lightsaber blades.

It takes more than two hours for Luke Skywalker to appear in The Force Awakens, and when he does, he doesn’t say a word. Such is the shadow that Mark Hamill casts over the film, though, that his belated discovery on the oceanic planet of Ahch-To (really Skellig Michael off the coast of Ireland) carries an almost mythic charge.

The idea was for Luke to arrive earlier but screenwriter Michael Arndt could never make it work. “Every time Luke entered the movie he just took it over,” he explains.

Halted by a five-man stormtrooper patrol as they enter Mos Eisley, things look dodgy for Luke, Obi-Wan and their droid companions. Until, that is, Ben Kenobi uses mind control to throw the ’troopers off the scent.

“You don’t need to see his identification,” he intones. “These aren’t the droids you’re looking for.” “The Force can have a strong influence on the weak-minded,” Ben explains afterwards

15. The Battle of Hoth - The Empire Strikes Back

Tackling the behemoth AT-ATs during a snowy Empire ambush, Luke rallies his Rogue Squadron to protect Echo Base’s power generator from complete destruction. As their snowspeeders’ laser cannons prove no match for the walking weapons, more inspired tactics are called for: Wedge trips them up with tow cables while man-on-the-ground Luke Skywalker takes a more direct approach with a lightsaber and a thermal detonator

Ahsoka confronts her former mentor in this emotional battle, fighting as much to avenge Anakin’s ‘death’ as to make amends for previously abandoning him. The master versus apprentice duel mirrors Vader’s later fight with Kenobi, but this time with Ezra Bridger watching helplessly

12. Force ghosts - Return of the Jedi

The original climax of Jedi saw Obi-Wan and Yoda joined by Sebastian Shaw’s Anakin for the Ready Brek love-in. Watch the Special Edition on DVD now, though, and you’ll see Hayden Christensen appear to give Luke his wordless blessing.

10. Training day - The Empire Strikes Back

Luke gets an object lesson in mind over matter when his X-wing subsides deeper into the Dagobah swamp. “We’ll never get it out now!” he moans petulantly, only to get a rebuke from his wizened green mentor. “Always with you it cannot be done,” sighs Yoda. “You must unlearn what you have learned!”

Luke does his best to retrieve his spacecraft, but it is left to Yoda to show him the way. “I don’t believe it!” gasps Skywalker. “That is why you fail,” comes his teacher’s damning response.

9. Mace Windu vs. Jango Fett - Attack of the Clones

Attack of the Clones In the chaos of the Clone Wars’ first battle, a moment of precision stands out. Purple lightsaber in hand, Mace Windu charges Jango Fett, severing the bounty hunter’s arm before slicing his head clean off. Dooku does not look best pleased.

Both impulsive Jedi and sinister Sith assassin are a Force to be reckoned with in this showdown. Frenetic duelling pauses only for heart-stopping tension as rain sizzles on humming lightsabers, before more intense combat ends with Anakin’s unchecked rage emerging the victor.

Four decades on, Obi-Wan’s noble act of self-sacrifice still brings a lump to the throat, as does his powerfully eloquent valediction. (“You can’t win Darth. If you strike me down I shall become more powerful than you can possibly imagine.”)

Our first sight of Anakin Skywalker’s abilities, the pod race – the Boonta Eve Classic – shows just how strong the Force was with this one. Reminiscent of Return of the Jedi’s speeder bike chase, with its videogame aesthetic, this high-speed dash across the rocky Tatooine terrain hints at what an intuitive pilot Anakin will become. Winning the race (and his freedom from slaveowner Watto), Anakin writes his name into local legend, long before taking a much darker path.

5. Rey lights up - The Force Awakens

There’s a moment in Episode VII when the Force actually ‘awakens’. Played for chills, Rey magics over her lightsaber and switches it on for the first time, bathing the audience in blue light. Kylo pauses. John Williams swells. Star Wars is reborn.

4. Yoda vs. Dooku - Attack of the Clones

After some initial parrying involving mind control and lightning bolts, Yoda and Count Dooku get down to business in AOTC’s standout sequence. (“It is obvious this contest cannot be decided by our knowledge of the Force, but by our skills with the lightsaber!”). What a shame it’s over so quickly though, Dooku using a mean trick to divert Yoda’s attention and make his escape.

His master dead, his nemesis gloating and his grip slipping, Obi-Wan looks done for as he hangs over an abyss beneath Darth Maul. Pulling a classic Jedi switcheroo, he leaps over Maul’s head, sucks in Qui-Gon’s ’saber and bisects the Sith.

2. Sarlacc pit - Return of the Jed

Facing a fate worse than death in the belly of the sarlacc, Luke turns the tables on Jabba the Hutt with some help from Artoo and a well-concealed lightsaber. The Special Edition gave a beak to this voracious desert beastie.

Learning from Han Solo that he’s “all clear”, Luke Skywalker uses the Force to fire his torpedoes into the Death Star’s compromising exhaust port. It is indeed a “great shot”, bringing an end to the Empire’s deadliest killing machine.

This feature originally appeared in our sister publication Total Film magazine, issue 266. Pick up the latest edition now or subscribe so you never miss an issue.