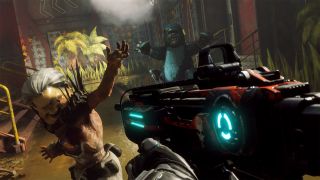 Rage 2 is best described as a wild fusion of id Software’s best-in-class FPS mechanics with Avalanche Studio’s mastery of open-world chaos. This is the development outfit behind such industry mainstays as Doom, Wolfenstein and Quake jumping into bed with the studio responsible for the likes of Just Cause, Mad Max and Renegade Ops. A picture of what that looks like and how it plays should form in your mind with ease, and your heart rate should rise in anticipation of getting your hands on it.

Rage 2 cheats sound ridiculous and so does the way you'll get them.

There's a sense that anything can happen to, and around you in Rage 2. That is an inherently exciting set-up for a shooter, particularly for one as overtly boisterous as this. That’s a feeling that is shared by the folks over at Avalanche, and it’s a creative challenge that the team, as senior games designer Loke Wallmo tells it, really gravitated to throughout development. “What’s so great about Rage is that you can pretty much drop anything in there and you can kind of make it make sense within that world. We are always pushing ourselves to do more, and to do crazier things. The amount of freedom we have working in the Rage world is amazing; we don’t feel very constrained at all.”

I did, of course, require an example… “Well, if we wanted to put a giant squid in the game we could have it; a giant squid with lasers on top of it, and as it starts climbing out of the water it starts blasting you with…” Wallmo begins to excitedly exclaim before being cut off by Tim Willits mid-sentence. Id Software's studio head is less than impressed. “Wait, is that not in the game? Why is that not in the game?” he says, laughing. “It’s the tentacle physics,” Wallmo responds, defiantly. “That is true,” Willits concedes. “Tentacle physics are tough.”

The thing about game development is that it is all about managing a wide variety of constraints across a dizzying degree of disciplines. The trick is making it look like there wasn't any. It's easy to wonder what might have been cut along the way with games like this one, the games that are just exuding content and personality at every corner. Wallmo admits that this has been a problem with the development of Rage 2, although that's largely true of everything that he has worked on.

“For every 10 crazy ideas that you have, nine don’t work. I think that’s the soul of game development right there; you try a bunch of things, many of them sound great on paper and you build them out and it just doesn’t work… or there is just some obvious flaw you can’t fix. But we have some really, really talented developers at Avalanche that love to try stuff out and, if you do that enough, you find a bunch of stuff – systems and mechanics – that really work well together, and then we polish that. We have a lot of fun doing it.”

That's reflected in Rage 2, or what we've seen and played of it in the last 12 months following its reveal at E3 2018. With the game's launch – and, subsequently, the GamesRadar review – on the near horizon, we won't have too long to wait and see whether Avalanche and id have been able to pull all of its ideas and ambitions into one succinct package.

Still, with games getting larger and larger, and more and more packed with content that's becoming an increasingly perilous task. Rage 2 might be being created by two of the most consistent development outfits in the business, but it's also a game on a scale far greater than anything either studio has put its name to in terms of raw content. If for every ten ideas, nine are being cut, doesn't that get exhausting – working with the knowledge that time could be better spent elsewhere? “I don’t think I’ve ever really worked on a project where this hasn’t been true in some sense,” admits Wallmo. “You can maybe feel like you’re wasting time sometimes, especially when you realise you can’t use something after investing in it, but there could always be something in it that could be used elsewhere or it can, in turn, give you another idea that actually does work. I think that’s just par for the course…”

“We’ve been pretty good at not creature creeping too much,” id Software's studio head Tim Willits jumps in, laughing. “But there’s always that risk when you work with a bunch of creative people, particularly a group that, like this one, comes up with some great ideas. But I think we struck a good balance.”

“Obviously we’ve been focusing on the core,” says Wallmo. “The gunplay, the Nanotrite abilities, how you jump, how you move, how you fight. That’s been our number-one priority, and then we are working with the vehicles and the worlds and locations and everything that’s going on in there.”

Wallmo tells me that Avalanche approached Rage 2's development with what he calls "an open mind", giving the collaborative relationship with id the space to breathe, which has in turn allowed the two to work out what was and was not important for the game. That's how we've ended up where we are now, with an FPS that looks utterly uncontainable, exuding energy and madcap potential at every turn. “We really tried to use our experience and tried to listen to what id wanted out of the game,” Wallmo says, contemplatively with a smile.

Something that id had at one time considered, we were surprised to learn, was bringing multiplayer to Rage 2. Thankfully, the studios quickly came to the realisation that keeping the game contained within a single-player campaign would give the teams more flexibility to play with convention, more scope to focus in on fidelity and more time to polish its open world and the content that inhabits it. “Of course we talked about it. It’d be great to do everything all of the time. But we do feel that we are offering a lot of content and playtime for what you get in the base game,” admits Willits. “More importantly, focusing on only one player allows us to do crazy stuff. We can literally break the game if we want to. If you’re having fun, who cares! Right? So that’s kinda been our mentality throughout development.”

Will Rage 2 be considered one of the great shooters of 2019? It's too early to tell, but while you're waiting for our review why not check out our list of the best FPS games.

It's a good mentality to have. It has given the two studios a focus that, as Wallmo puts it, "has allowed us to focus a lot more on that core experience. That core 'Wasteland Superhero' experience." The result is something that all FPS fans should give a least a cursory glance when it launches on 14 May, 2019 for PC, PS4, and Xbox One. Rage 2 has the potential to thrive in this environment, a ridiculous and visually vibrant FPS that is focusing down on a core single-player experience – in so many ways it feels like the direct antithesis of the way the market was moving. We'll know soon enough whether it has been worth the time and effort.

Oh, and for the record, I did press the pair on whether the aforementioned behemoth squid – you know, the one wielding the laser cannons – would appear as future DLC. The answer was, sadly, inconclusive. Still, we can dream, can't we? – not too hard, mind, as cephalopods are nightmarish creatures from the hell realm.