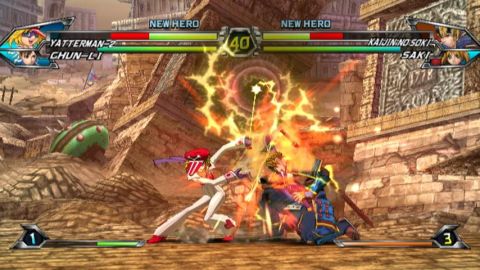 Even though we adore Street Fighter IV, it didn’t make many concessions to gamers who were new or just returning to the fist-meet-face genre; complicated combos demanded perfect timing and spacing, and we dare you to find anyone on your friend list who actually completed all of the excruciating trial challenges. Capcom attempts to address that issue with Tatsunoko vs. Capcom: Ultimate All-Stars; simpler controls, easier combos and even more ridiculous super and hyper moves present a far more approachable and light-hearted option for potential fighting game fans put-off by SFIV’s hardcore dedication.

As is the vs. series tradition, individual blows do very little damage and must be strung together with flashy (i.e. screen-filling) super attacks to deal significant damage. Fortunately, the energy bars needed to unleash these super moves charge up very quickly, so there’s barely a moment when one (or both) fighters aren’t blasting each other with supernova-sized blasts. Even better, almost all super attacks link into combos; Ryu can easily chain his super Hadoken into almost any combo, for example. Despite this relative simplicity, TvC could have benefited from a trial mode a la Street Fighter IV to help explain some of the game’s more advanced features and unorthodox characters. Instead, players must make do with a typical practice mode against a dummy.

As with any fighter, tight gameplay is essential, and as long as you’re not playing with the Wii Remote, TvC definitely feels solid. Anyone even remotely serious about this game will need a Classic Controller, GameCube controller or even a $70 joystick to enjoy it. The Remote is obviously awkward and not intended for this type of game, plus it doesn’t have enough buttons to cover the basic attacks. Thus, it simplifies the controls even further, allowing for one-push special moves; just try not to pull your eyes out of your skull when Grandma busts out Level 5 Metsu-Hadokens with the flick of a wrist.

The arcade board for TvC was actually built with Nintendo’s console in mind, so this is no cheap Wii port. The character models and striking design are powerful without any HD delivery, easily making this one of the most gorgeous and unique-looking titles on the system. Partly to thank for its standout appearance is Capcom’s cast of characters, ranging from Street Fighter, Mega Man and Viewtiful Joe superstars to Rival Schools: United By Fate also-rans. Tatsunoko’s roster on the other hand, is pretty much a big question mark to anyone who didn’t grow up in Japan circa 1970-90 (though our extensive guide to the characterswill help clear things up).

Capcom has done a fine job with the localization and has included exclusive original characters like Dead Rising's Frank West for the western release, as well as a bevy of other content. Each character has a unique, if nonsensical, ending with a few still images drawn by comic book heavies Udon, and believe us, these drawings are infinitely more pleasing than the horrid Afghanistanimations SFIV was saddled with.

Down are up ell, ex why be?