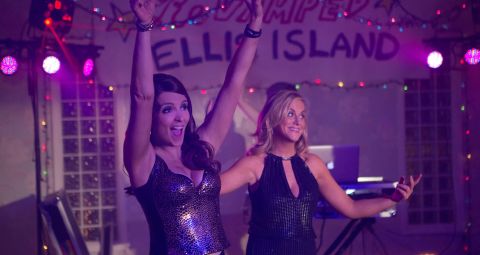 Laugh-out-loud in places. Frustratingly flat in others. Sporadic giggles guaranteed. Fey and Poehler’s comic chemistry is undeniable; shame the script didn’t get a Liz Lemon rewrite.

Pairing Tina Fey and Amy Poehler for a nostalgic party flick should be like detonating a comedy powder keg. Who could forget their incendiary golden globes 2015 intro, in which they roasted George Clooney, Boyhood and (perhaps most controversially) Bill Cosby with the kind of butter-wouldn’t-melt glee that rocketed their TV comedies (30 Rock and Parks & Recreation respectively) to ratings heaven?

It’s no surprise, then, that Sisters – their third movie collaboration after Mean Girls and Baby Mama – leans heavily on the duo’s comic prowess, but even this seasoned duo struggles to rescue what is comparatively flimsy material.

Having discovered their parents are selling their childhood home, rebel sis Kate (Fey) and sensible sis Maura (Poehler) decide to throw one last party. Maura’s got her eye on a cute neighbour (the hugely likeable Ike Barinholtz), and so Kate agrees to be sober sister for the night, safeguarding their parents’ pad from spillages and scraps.

Of course, it’s not long before things start to go wrong, especially when one-time high school rival Brinda (Maya Rudolph) arrives, miffed that she wasn’t invited to the party and intent on pulling the plug.

Between the dance routines and tiffs with their on-screen ’rents (James Brolin and Dianne Wiest, superb), it’s clear Fey and Poehler are having a hoot, and Sisters soars when director Jason Moore (Pitch Perfect) lets them off the leash. Run-ins with pedicurists, changing-room attendants and the cops zing with off-the-cuff humour, and the improvised moments stand out amid the increasingly weary genital gags.

Our central duo aren’t the only ones transcending the material, either, with support players like SNL regular Bobby Moynihan (as a manic ex-classmate) and even John Cena (in a white vest and black beanie) scoring big laughs. Standout scenes are peppered throughout (the wardrobe malfunction glimpsed in the trailer; Rudolph on great ‘mean girl’ form), but Sisters lacks the absurdist nous of 30 Rock and the satirical bite of Parks & Rec.

Fey and Poehler have never written a vehicle for themselves (it’s hard to imagine Fey lumbering herself with the mother-daughter subplot she gets here), but they’re clearly able to mine gold from average material – their likeability is what bumps Sisters from fine to good. It may be time for them to put pen to paper, though, and gift themselves the movie they deserve.

Laugh-out-loud in places. Frustratingly flat in others. Sporadic giggles guaranteed. Fey and Poehler’s comic chemistry is undeniable; shame the script didn’t get a Liz Lemon rewrite.