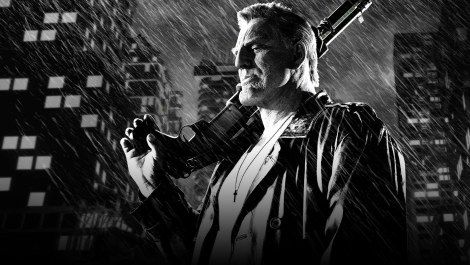 Given the throwaway nature of Rodriguez’s Machete and Spy Kids sequels, it’s almost a relief that he and Miller took their sweet time here. Blending two adapted tales with two freshly minted Miller originals, we start with fan-fave Just Another Saturday Night , re-acquainting us with Mickey Rourke’s Marv as he terrorises some frat boys and flies through a cop car windshield. And that’s just the five-minute pre-credits pre-amble.

The titular centrepiece story, based on Miller’s 1993 work, sees luckless private eye Dwight (Josh Brolin, replacing Clive Owen) lured by former lover Ava Lord (Eva Green) into killing her husband. Bad move, as it turns out, with this “pathological” femme fatale out for all she can get. “She owns me – body and soul,” sighs Brolin, who – like Green – slips effortlessly into this noir-ish nightmare, like a latter-day Fred MacMurray sizing up Barbara Stanwyck.

Certainly, the curvaceous and frequently naked Green is in her most exposing role since The Dreamers – one that makes the MPAA fuss over her semi-clad appearance on the film’s poster something of a joke. With Juno Temple in handcuffs, Rosario Dawson’s heaving bosom and Jessica Alba’s arse-slapping, Rodriguez and Miller have steamed up this Sin City like a kettle in a Turkish bath.

Wrapping around the Dame To Kill For vignette are Miller’s two new pieces: The Long Bad Night and Nancy’s Last Dance . The former sees gifted gambler Johnny (Joseph Gordon-Levitt) dangerously take on Senator Roark (Powers Boothe, excellent) at the card-table; the latter sees Alba’s now booze-addled stripper Nancy also out to get the corrupt politician, four years on from the death of selfless cop John Hartigan (Bruce Willis, back briefly).

True, the new 3D adds little and the stories are still about as deep as a shallow grave. But between its coal-black humour and the immersive b/w visuals, bringing Miller’s lurid world vividly to life (with some wonderful splashes of colour – notably Green’s eyes), there’s enough here for fans of the first to get their rocks off. Add in fine support from newcomers like Dennis Haysbert, Jeremy Piven and Ray Liotta, and this is one summer sequel to kill for.