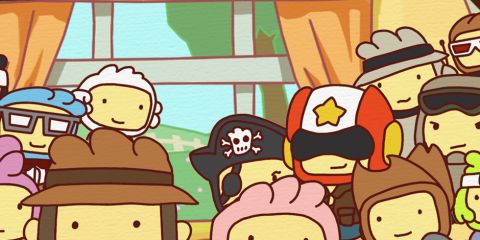 Since 2009, 5th Cell's been tinkering with its Scribblenauts franchise, expanding the game's already-massive lexicon and introducing new ways to use that lexicon to solve puzzles. Now, Scribblenauts Unlimited has risen as the third attempt at expertly orchestrating an adventure that allows players' attempts at out-of-the-box puzzle-solving, but it simply isn't able to suitably expand on the content the previous two games delivered. Unlimited, it turns out, is actually a poor choice of wording here, as your adventure with Maxwell does see its fair share of obstacles when it comes to allowing you to play however you choose.

Maxwell returns in his adorable crimson rooster cap (a series trademark), this time on a journey to free his sister from a curse that's slowly petrifying her. The only way to break this debilitating affliction is to collect Starites, which you may well remember from the previous games as tiny star fragments that come to fruition whenever a human becomes happy. Armed with the magical notepad that brings just about anything you can dream of to life, Max's journey to make people happy and collect the resulting Starites begins.

You'll explore various regions ranging from verdant jungles and regal castles to the dungeons of said castles and more. The action is mostly in a simple side-scrolling fashion and you'll seek out NPCs in need of your help. As you solve their problems, you'll be duly rewarded. Unfortunately, most of the dilemmas you’re faced with often aren’t as imaginative as the tools you’re given to solve them. You’re allowed an astronomical amount of potential solutions with which you can come to the aid of NPCs, but it never feels as if the game is pushing you to flex your creative muscle. More often than not, the easiest and quickest answers are the ones that work the best.

For example, one particular mission charges you with ridding a restaurant of pests so they can obtain a clean bill of health from an upcoming inspection. It’s up to you to decide the manner in which you’d like to dispatch the critters, whether you conjure a creature to consume them or simply pick them off one by one by means of a weapon. A zombie frog or even a shiny flyswatter might come in handy here. You have a few laughs, complete the objective, and move on, feeling fulfilled--situations like these are where the game flourishes.

On the other hand, going above and beyond the scope of a mission usually causes issues. Not every puzzle’s solution works as well with the silliness as demonstrated with the “health inspection” example. Simply taking advantage of the game's engine, which allows the usage of adjectives, can make the item you’ve created virtually unusable in the context of the mission. Additionally, vague objectives can make problem-solving difficult.

Also, many of the challenges requiring your input feel more like question-and-answer segments than puzzles, with answers meant solely to let you rip with a silly creation, like a jobless man searching for work who just needs an education. Similarly, you need to feed a hungry dog near the start of your adventure. Most of these instances are weighted toward the beginning of the game, but become fairly common as it wears on, leaving little room for true head-scratchers.

What made the original game so delectable was its sometimes obtuse and frustrating problems that required creative and efficient solutions. Scribblenauts Unlimited is less so. Story mode itself can be completed in a matter of hours because nearly all of the game's puzzles can be solved through mundane solutions. As such, usually the only reason to find a creative solution is your own personal satisfaction.

Because of this, you'll probably spend most of your time chuckling to yourself at what you've conjured rather than using your creations to advance. The same can be said of the excellent avatar editor and additional editing mechanics--plenty of fun, but mainly for your own vain purposes. It's hilarious to stick antlers on the sides of your avatar's head and run around helping people, but it doesn't enhance gameplay in any real manner. If you're into Scribblenauts for creation only, you'd best be served mucking about in the Sandbox mode for essentially the same experience.

It's clear that 5th Cell had ambitious ideas here, especially given the title. And what it does present is pulled off with the same slick execution and silliness of the previous games. But there's no forward movement that evolves Scribblenauts. This is a collection of craziness, laser sharks, and silly robots all clamoring for happiness, and you can certainly oblige them--but don't expect a real challenge.