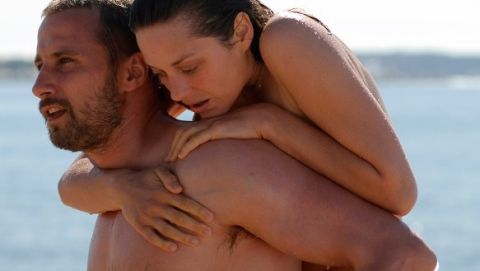 What doesn't kill you makes you stronger.

The motivational mulch behind 1,000 feel-good dramas has all but lost its power.

The great achievement of Jacques Audiard’s visceral, relentlessly tense drama (based loosely on a collection of short stories by Craig Davidson) is that it manages to give this old cliché a bracing new life.

In the tall, dark and handsome tradition of Audiard leads, Romain Duris ( The Beat That My Heart Skipped ) and Tahar Rahim ( A Prophet ) before him, brooding Matthias Schoenaerts plays Ali.

As the film opens, Ali arrives in a Cote d’Azur town, with his young son and not a penny to his name. He moves in with an estranged sister and begins to build a new life.

When he meets orca whale trainer Stephanie (Marion Cotillard) in a club where he works, it seems a chance, meaningless encounter, unlikely to be repeated.

Then, several weeks later, when her life is changed by a disabling accident, she finds his number and calls…

Cotillard’s performance as Stephanie is flawlessly naturalistic, yet underpinned by all the emotional power necessary to play a woman in the midst of total transformation.

When Stephanie’s accident plunges her into depression, Ali simply gets on with it, but his running, fighting, shagging physicality is exactly the inspiration she needs to get on with it too.

The flipside of Ali’s vitality, though, is a recklessness that fills the film with foreboding.

Rust And Bone has more heart-in-the-mouth moments than an artichoke eating contest. Ali’s bare-knuckle street fighting, his loving-but-neglectful parenting, his heedless involvement in anti-union spying all threaten imminent disaster for him and those around him.

In fact, the tension is so relentless that the crux of the drama becomes not, “Will something horrible happen?” (it will) but rather, “When it does happen, will these characters survive? And how?” That, as it turns out, is the much more interesting question.

It isn’t perfect: the use of Katy Perry’s ‘Firework’ on the soundtrack and the final scene’s voiceover both verge on risible, but as A Prophet fans well know, Audiard has a sorcerer’s facility for suspending mystical moments in realism, like dust particles in sunlight.

Rust And Bone puts you through the wringer, but it’s well worth the pain.