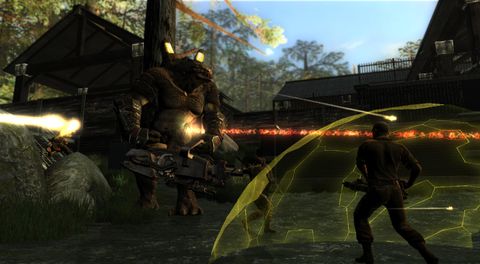 Relatively early in the Campaign Mode of Resistance, our hero Nathan Hale bursts out onto the shoreline quay to be confronted by a horizon dominated by a cloud-sized Chimera ship, looming over the suspension bridge with the surrounding sky teeming with tinier enemy craft. It’s a moment intended to illustrate the seemingly insurmountable odds facing humanity, but more importantly it’s the first time you get a clear picture of how special Resistance 2 really is. The detail, scale and sheer menace of the scene, combined with the timing of reveal, make it an open-jaw moment of awe, the type that HDTVs were made for.

It’s such moments that were noticeably absent from the original game, which might have been the stand-out title of the PS3 launch but can’t claim to be the console’s best FPS. Resistance 2, however, is in with a shout as Insomniac Games have delivered a master class in how to make a sequel. Firstly there are the aspects you’d expect to be better in a second game, such as the graphics and framerate, which enable the action to be played out on a far greater scale. Replacing skirmishes in York and Grimsby is city-wide devastation in Chicago and a frontal assault on a tower block-tall Leviathan.

The weaponry includes the wonderful Bullseye and Auger, and introduces a Magnum with explosive bullets and a highly efficient Marksman sniper rifle among others. Learning how to get the most out of both primary and secondary fire from each weapon is essential to combat the ranks of the Chimera that have diversified with the near-invisible Chameleons and the awkwardly defensive Ravagers. The way that each enemy requires a weapon-specific strategy is a real success – this is a trim and toned blaster where no idea is wasted.