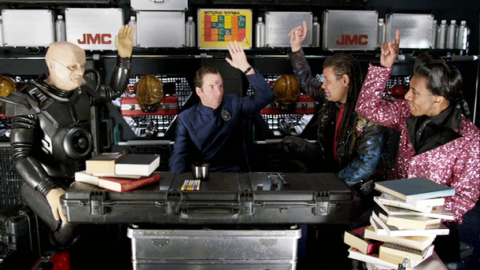 THE ONE WHERE Red Dwarf is attacked by a Simulant Death Ship and Rimmer learns the truth about his parentage (either that or his dad is even more of git than Rimmer ever imagined, and just wanted an excuse not to send him any more birthday presents).

VERDICT Red Dwarf X ends on a high note with probably the best episode of the series. We say probably because if you judge this show based on gag rate alone, “The Beginning” doesn’t really have as many belly laugh moments as some of its predecessors. Not that we’re saying it’s short on laughs, you understand. Duel-obsessed Hogey the Roguey (“You keels my brother!”) is hilarious, Kryten’s, “Although the Death Ship didn’t indicate the exact nature of their business, sir, I’m guessing it’s something a bit… deathy,” is pure Dwarf comedy gold and the hari kari scene is up there with the series’ classic moments.

But “The Beginning” isn’t quite so obsessed with one-line zingers, self-contained ridiculously convoluted conversations and randomly bizarre metaphors in the way Red Dwarf sometimes can be. There’s nothing wrong with one-line zingers, self-contained ridiculous conversations and randomly bizarre metaphors, of course. Hell, Red Dwarf has pretty much honed them into an art form. But “The Beginning” feels more satisfyingly consistent; more coherent, more focused and whole. Less desperate to get a laugh every line (it settles for every other line) and more interested in telling a story with some heart (and indeed guts… literally) to it. The opening flashback is almost elegant in its slow burn set-up to cracker of a punchline (“And you are a baboon, four eyes”), Hogey's prowl around the Dwarf looking for the (imaginary) killer of brother is perfectly paced, and even Cat becomes uncommonly (but touchingly) philosophical in his pep talk to Rimmer.

And a great little story it is too, overturning everything Rimmer held dear with a clever inversion of that legendary Star Wars line: “Arnold, I am not your father.” (Is it any coincidence that the message is delivered in a style that’s reminiscent of Princess Leia’s “You’re our only hope” hologram? And that they’re hiding out in an asteroid at the time?). Wonderfully, this revelation doesn’t crush Rimmer; instead, the knowledge that he’s the product of the gardener’s loins (“I don’t smell of manure… he’d be so proud!”) spurs Rimmer into becoming a working class hero. Red Dwarf’ s ultimate twist, surely?

One way in which the episode can’t compare with Star Wars is in the effects department; nevertheless there are some very impressive (and pretty) model shots on offer (and yes, most are models, not CG). You can’t beat a few death ships blowing things up, can you? ILM may not be quivering in their boots, but then ILM probably would have had trouble animating a opening hatch with the budget Red Dwarf had to offer.

One unusual element in the episode is that there are whole scenes on the Death Ship which don’t involve any of the main cast. This is very rare on Red Dwarf , but the evil Dominator and his subordinates are more than strong enough characters to carry these moments. They’re so good, in fact, you kind of hope the Dominator and Wednesday found an escape pod so they can return in the future.

There are a couple of missteps. Kryten wibbling about the house work while there's a breach in the bunk room feels totally unnecessary and jarring. The set for Simulants' ship interior looks suspiciously cheap. The solution involving the Molly-D gun is pretty much telegraphed (when Kryten pops in to see Rimmer while he's working on the battleplan and leaves the gun on the table, he may as well wink at the camera). But they’re minor irritations, swamped by all the Dwarfy goodness.

What we’re trying to say is: we sorely hope there is more Red Dwarf , but if not, “The Beginning” was a great way to end.

DEVELOPMENT Much of this episode was based on elements from one of the unused Red Dwarf film scripts. Indeed, Will Ferrell was once considered for the role of Hogey the Roguey. Rimmer’s plotline about his father, though, is totally new.

CONTINUITY It has been established in previous series that Rimmer was born on Jupiter’s moon Io, so it only makes sense that he should attend Io Polytechnic. This is the first time we’ve learnt that his father was a teacher, though (maybe he turned to that career after his business went bust?) We’ve also known previously that Rimmer’s mother had affairs with other men, his Uncle Frank specifically (“The Last Day” series three, episode six) so it’s in character that she’d shag the gardener as well. Which may explain Rimmer Sr‘s mnemonic on the wipeboard (see below) – although it’s never been made clear if Rimmer’s parent ever did divorce,it was clearly playing on his dad’s mind. (Rimmer, however, did divorce from his parents – as mentioned in “Better Than Life” series two, episode two.)

A NEW FACE In “Better Than Life” Arnold Rimmer’s dad was played by John Abineri; here he is played by Simon Treves.

DOUBLING UP The corduroy, patched-elbow jacket worn by Arnold Rimmer’s dad was one of the show’s costume designer’s own jackets.

DOUBLING UP 2 The classroom at Io Polytechnic was actually the Red Dwarf actors’ green room redressed.

RIMMER'S BATTLEPLAN CHART We’ve freeze-framed it so you don’t have to. Click on the image for a much larger version.

MOST CONVOLUTED IN-JOKE OF THE WEEK Wondering why the following conversation so sounded naggingly familiar? And why it was cut off so suddenly?

Lister: “You’re right. We’ve been in these situations before. We always find a way out.”
Kryten: “Like that time that highly corrosive micro-organism almost destroyed Red Dwarf.”
Lister: “The highly corrosive micro-organism, exactly. We got out of that one.”
Rimmer: “Yeah, thanks to me.”
Kryten: “Oh, sir! You cannot claim the credit for that.”
Cat: “It was a total fluke.”
Rimmer: “Fluke? You think that was an accident, the way I…?”
Cat: “Sssshhh! What’s that?”

That’s because they were about to tell how the Dwarfers survived the cliffhanger ending to “Only The Good…” (series eight, episode eight), which has never been explained. Oh, Naylor, you tease. Then you play the same trick on us again in the post-credits bonus scene!

WHAT’S IN A NAME? The very first episode was called “The End”. Do you think Doug Naylor may suspected that “The Beginning” would be the last episode of Red Dwarf he’d ever make? It would be quite poetic. Hopefully, though, the healthy viewing figures on Dave will mean otherwise.

CLEARLY NOT STAR TREK FANS If the Simulants had ever seen Star Trek II: The Wrath of Khan , they may have survived the episode. Think in three dimensions, dammit!

But since we’ve already mentioned that in the review, what about this one?

Lister: "So, let me get this right. We’re being attacked by something but we don’t know what, and there’s no way of finding out what’s out there?”
Kryten: “I have a suggestion, sirs.”
Rimmer: “What?”
Kryten: “How about we look out of the window?”