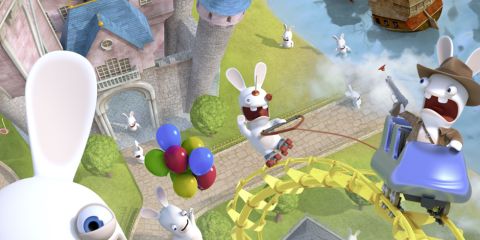 From the day these off-kilter creatures were born, the Rabbids have been the stars of several casual party games from publisher Ubisoft. After many lovably manic adventures over the past six years, the odd mammals are taking their specific brand of mayhem to the Wii U in their newest get-together, Rabbids Land. It’s a grand old time as usual, but the Rabbids don’t have enough new tricks to match the capabilities of their new home.

Rabbids Lands’ gameplay stays pretty close to the formula Mario Party pioneered years ago. The game pits up to four players against each other as they take turns rolling dice to move around the board. Players compete in a number of random minigames along the way, and once a player has collected enough of a certain item--trophies, in this case--they’re declared the winner. The structure is hardly revolutionary, but the board game format is so well established that it’s hard to knock it.

As is the case with games in this genre, the real measure of quality are the minigames, and Rabbids Land’s are all over the place. The game might technically accomodate four players, but the actual challenges are one-on-one in nature. One player holds the GamePad while another uses a Wii Remote, leaving the remaining players to just sit and watch the action. Most challenges are short enough that it doesn’t get too boring for those left out, but it’s hardly the best way to design a four-player game.

Although the two-player nature of the attractions in Rabbids Lands’ virtual theme park isn’t ideal for bigger groups, it does provide some extra focus for the minigames, making for better gameplay overall. Only a few attractions really stand out among the twenty-plus that are included. The best of the bunch is a clever mix of surfing and rhythm game elements, and another winner involves hurling penguins at a rickety pirate ship using wind powers. Even with the weaker attractions, like the unwieldy rolling boulder attraction straight out of Indiana Jones, personality goes a long way in keeping things light and fun.

Outside of the attractions, the remainder of each board is mostly filler. There are some goofy trivia questions, random events that shake up the score considerably, and power-ups that lack any real impact on the outcome. The game subscribes to the Mario Party tradition of random, unbalanced punishments/rewards, but that unpredictability is part of the allure of party games like these, and you know early on that you aren’t playing on the most level of playing fields.

For early adopters of the Wii U, Rabbids Land offers up some dependable thrills for your bucks, and the maniacal creatures that star in these games are still a hoot. But with all the choices available at launch, particularly in the party genre, Rabbids Land is too predictable to be a must-buy, unless you’re the type of person that wishes Nintendo Landwas more like Mario Party. Otherwise, wait for this one to hit the bargain bin.

Henry Gilbert
Henry moved from the suburbs of northern Florida to work at GR+, and hasn't looked back once in seven years. When not collecting Mario toys, you can find him constantly checking his Twitter.
See comments
Gaming deals, prizes and latest news