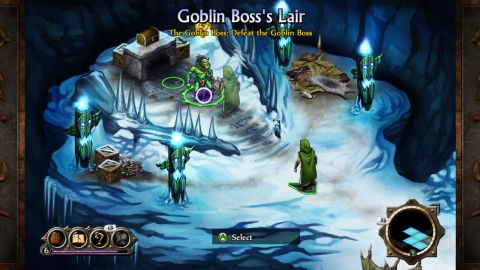 After the giddy heights of the original Puzzle Quest, Infinite Interactive has released ever-lazier rehashes of the same ‘match-three puzzle meets RPG’ idea. But Puzzle Quest 2 is billed as a straight sequel to the first game, so has some of that original spark been rekindled? Kind of…

As this is a sequel any similarities are forgiven. You still play a generic RPG character and you still fulfill quests by matching colored tokens on a grid. As in Galactrix, minigames for treasure-finding, lock-picking and the like now play a part, adding some variety but not cropping up with the numbing regularity they did in the series’ space-based outing. Thankfully, the AI is less unfairly lucky than before, and new ‘pummel’ tiles let you use powerful weapons as well as spells. So what’s the problem?

Well, the aesthetic changes have spoiled things somewhat. The attractive isometric map is clunky to navigate with your pseudo-3D character, and you don’t get a sense of the scale of the game world. A decent script is ruined by lame sound bites for each character, and the revamped top screen makes it harder to see how much mana you’ve collected in battle. Another battle-related gripe is that you now have to pull up a menu to see how much mana you need for each spell, which slows things down a little.

These may sound like minor problems but they’ve made Puzzle Quest feel a bit laborious, which is a shame when the core game has actually been improved. Also, with Might and Magic: Clash of Heroes lighting up our lives, the Quest formula feels a little tired. But we’ll give it an extra point for the inclusion of an evil gelatinous cube.