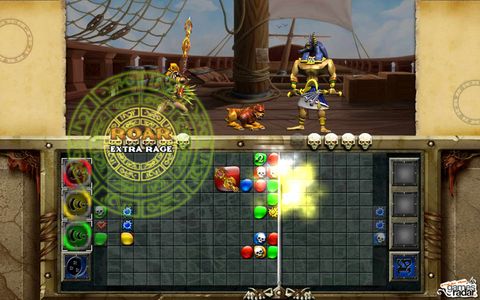 Comparisons with Puzzle Quest are entirely justified here. Not only does the game mix traditional block puzzling with RPG elements, but it’s also made by the same people. Funny then that it doesn’t quite hit the spot. It works similar to Tetris Push: Do well matching blocks and you’ll gradually reduce your opponent’s game board (although the boards are arranged side-by-side). You can also level up your warbeast in an intriguing spin on the gem-stacking formula.

The gameplay is as deep and rewarding as ever, but the Tetris-style gem stacking feels fiddly thanks to an overabundance of rules, unresponsive controls, and a too-small screen. And why is the screen small? So we can see the Conan-lite character hitting things with his broadsword. It’s not even well animated.

Those who’ve finished Puzzle Quest and can’t wait for the sequel could do worse, but anyone else should seek out Quest rather than Chronicles.