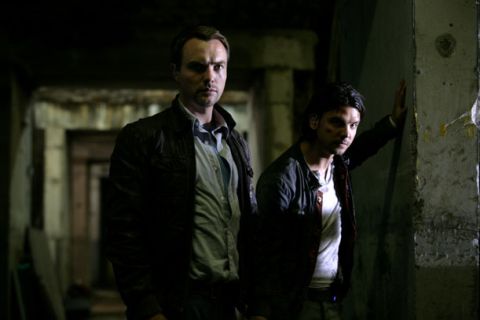 THE ONE WHERE Matt’s suspiciously spot-on knowledge about how to defeat some giant lice from the future leads to Abby guess his secret.

VERDICT What better way to kick off a new series of Primeval (and the producers have decided that this is series five, not series 4.2 or whatever) than with a few sarky remarks from Lester and a workman getting carted off in the beast-of-the-week’s pincers?

This isn’t Primeval -by-numbers, though, despite the heart-warmingly trad opening. Blimey, for the first time in ages even the monsters of the week have more of a plot purpose than just giving Becker something to do. Nope, this time round they’re an intrinsic part of the plot, helping to propel Abby and Matt into a partnership to fight the future. It’s not like last season when the monsters and the arc plots seemed to exist in parallel universes; this feels more satisfyingly like a show that’s making the most of its format.

And that arc plot is definitely stepping up a gear. It’s great that the writers are driving a wedge between Abby and Connor based on their own beliefs and personal outlooks on life, rather than generating some artificial outside force to create friction; the growing rift is believable and it’s logical. At the same time Hannah Spearritt and Andrew Lee Potts are playing the roles perfectly (possibly helped by the fact that they’re a couple in real life) making it clear in subtle little ways that whatever their differences, they’re still in love. Much as it pains me to admit it ( Who fanatic that I am) I’m far more convinced by them as a couple than Amy and Rory.

Sadly, the Philip/Connor pairing isn’t quite so convincing. This is mainly because Philip is being portrayed as such an old-fashioned moustache-twirler. It’s a shame, because his actual plan – to harness energy from the anomalies – does have a certain logic to it, and some of his arguments and ideas are worthy of a fair hearing at least. But he’s so clearly cast in the “ruthless, scheming, ambitious monomaniac” role, it makes Connor look a little stupid to be siding with him so readily. A bit more balance between the two parties’ respective viewpoints would have made the series more intriguing. (Of course, if there’s a big twist in which it’s Matt’s actions that cause “bad” future, and Philip’s energy scheme that prevents it, I’m more than happy to eat my words.)

The reveal of the New Dawn machine is severely lacking in wow factor, more because of the rather flat way it’s shot, rather then the designs or FX. In fact, the FX throughout are almost flawless even if aren’t always exploited to the best effect. The climactic scenes inside the shopping centre rapidly morph from exciting and tense to dull and irritating, as the creatures shamble very, very slowly into action, waving the odd mandible in Connor’s direction with about as much enthusiasm as a kid forking peas around a plate.

All the while, Ben Miller’s doing what Ben Miller does best, and milking a comedy subplot for all its worth. To be fair, the “knighthood” storyline isn’t particularly well written, but Miller is the prefect comedy actor to crank the humour up a notch, eking the most of the merest grimace.

The best thing about the episode is what it promises for the future. It may be clunky in places, but the cogs of the arc plot are clearly meshing now, and the show looks like it’s ready to ratchet up the action and ambition.

MONSTER OF THE WEEK Not “real” dinosaurs this time, but a made-up creatures from the future that look like giant woodlice, and unlike the future predators, they don’t even get a name. But Doctor Who fans will know where we’re coming from when we say we’d like to think of them at tractators (because they’re what tractators should have looked like).

GREAT LESTER MOMENT Lester: “I supposed you’d like a tank as well?”
Becker: (With hope in his voice) “A tank?”
Lester: “I was joking. You can’t have a tank.”

INFLUENCES These days, you can never tell if a close-up of a glass with liquid jiggling around inside is an homage to Jurassic Park , or just the easiest visual way of saying, “Big monster coming.” And did anybody else think, “Nuke the fridge!” when Connor and Matt clambered out of the skip?

CRINGE Sorry, but that moment with the guy at the barbecue gingerly offering the tractator his hot dog was excruciating.

BEST LINES Philip: “When this is finished, it’ll make sense of the anomalies. It’ll make use of them.”
Connor: “To do what?”
Philip: “To solve the greatest problem facing mankind today.”
Connor: “It’s gonna work out why there’s always a sock missing after you’ve done the washing?”