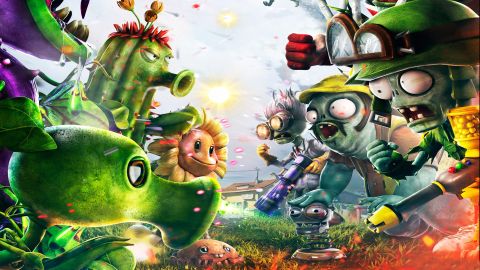 Changing genres mid-franchise is a tough sell, especially when you're taking a popular series and saying "screw it, we're making it a shooter!" Popcap's Plants vs. Zombies is the latest to make the leap, and arguably the strangest example yet; Garden Warfare outright ditches the tactical gameplay of the original for large-scale multiplayer gunfights. No longer are you planting Bonk Choy and standing back as it clobbers zombies--you're in the thick of it, firing peas from your pea shooter mouth and sniping zombies with the Cactus's long-range shots. And though there are some strange design decisions and balance issues, the resulting shooter is charming, enjoyable, and wholly worthy of the Plants vs. Zombies name.

Whereas the PvZ of the past was a lightweight tower defense series, Garden Warfare is a class-based third-person shooter, with plants and zombies going to war in suburban areas with guns, seeds, rockets, and petals. It's a much more action-oriented experience, obviously, but the core of the franchise--the delightful struggle between plants and zombies--is pleasantly intact, and held up by strong core gameplay that's enjoyable in its lunacy.

Garden Warfare lacks a single-player campaign of any kind, instead doubling down on a trio of cooperative and competitive multiplayer modes. Each dips into the same five rural levels, repurposed to scratch a different multiplayer itch, and though none are all that outstanding, they're enjoyable in their own right. Vanquish (Team Deathmatch) and Gardens & Graveyards (Control Point/Rush Mode) are polished and engaging, and take advantage of the idiosyncrasies of the PvZ universe in 12-on-12 battles. While Vanquish doesn't deviate from the team deathmatch archetype, G&G allows the vegetation side to defend its points with potted plants, while the zombies can spawn undead AI to help swarm the enemy's gardens. This minor change makes the already large-scale battles feel even more massive, and gives you additional control over the mayhem.

Plants vs. Zombies: Garden Warfare feels like a game that could easily be exploited with microtransactions--the ability to buy the in-game currency would speed up the process of unlocking things significantly. At launch this isn't an option, but even if it gets added I wouldn't worry too much. The new gear isn't game breaking as far as I can tell, and people who spend money to get cosmetic stuff (if that is even an option at any point) will actually be robbing themselves out of the inherent joy of opening booster packs.

Garden Ops flies closest to traditional Plants vs. Zombies gameplay, with a team of four plants fighting off increasingly difficult waves of zombies and battling the occasional boss wave. Sure, it's just Gears' increasingly prevalent Horde mode, but the premise translates perfectly into the PvZ universe. Though it lacks the scale of the 24-player skirmishes, the more intimate setup and focus on co-op make for engaging gameplay--and the ability to fortify your base with potted plants is a clever tip of the hat to the franchise's roots (pun not intended but, wow, that worked out well). Each multiplayer level has a few locations to start the waves from, too, making up for the otherwise paltry list of multiplayer maps.

The Plant and Zombie factions each feature four unique, playable classes, and they all come with a trio of special abilities that help them stand out. While there are some that are blatantly better than the rest, they all have their own place on the battlefield--from the high-damage Zombie All-Star (who can kick explosive zombies, dash, and spawn tackling dummies) to the healing Sunflower (who can fire beams of solar light when she's not healing her allies). There's a good deal of asymmetry to it as well, creating a fun dynamic between the sides and making for chaotic bouts. It also lends itself to some balance problems--good luck finding anything as powerful as the one-hit-kill Chomper on the zombie side. Seriously, that guy's a dick.

These eight classes (and the ability to customize them) is the most surprisingly deep part of Garden Warfare, and adds depth to the otherwise lightweight shooter. Every character has cosmetic slots that can be outfitted with a number of items, letting you don sunglasses, helmets, facial hair, oven mitts, and other random gear to change your class's look. There are also entirely different characters you can unlock that not only totally overhaul the character's appearance, but switches up their play-style as well. Sure, strapping a beard onto the Scientist is cool, but it's even more exciting when you can get a totally new character skin that swaps his weapon for a telekinetic dolphin. There are even passive upgrades that can be unlocked as well, making for a huge amount of content to discover and plenty of reasons to continue playing.

New cosmetic gear, potted plants, deployable zombies, and other items are found via booster packs, which are purchased using in-game currency (at launch there aren't any microtransactions). Yeah, rewards could technically just be doled out for successful play, but locking them behind booster packs makes them significantly more exciting. It's a psychological trick and it works--I'd be lying to myself if I didn't admit to playing a few extra matches just to get the slightly more expensive pack to see what was inside (in case you're wondering, it was a few plants, a pair of goggles for the soldier, and one of six pieces needed to unlock a new Sunflower skin).

There's nothing groundbreaking about Garden Warfare, but beneath the absurd premise there's a clever, polished shooter with heart--even if it's held back by balance issues and a lack of maps. Whether you have a dozen friends you want to play Gardens & Graveyards with or a small group to grind booster packs in Garden Ops, there's a lot to like in Popcap's first shooter. Wow, I really didn't expect to ever write "Popcap's first shooter" in a review.