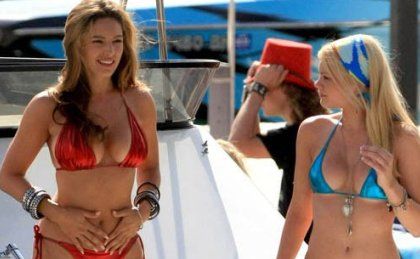 Kelly Brook has had her knockers, but no one can accuse her of not making the most of her assets.

And nobody could accuse Alexandre Aja of not doing the same in his stereoscope redo of Joe Dante’s 1978 fish-athon, there being almost as many shots of the Brit babe’s mammaries as there are of the prehistoric flesh eaters that give it its name.

Brook plays one of the many young things who descend on the picturesque Lake Victoria (actually Lake Havasu in Arizona) for a boozy spring break of aquatic mayhem.

It’s their bad luck that it coincides with a subterranean earthquake that frees thousands of piranhas from their underwater prison, their first victim being Richard Dreyfuss in several tongue-in-cheek nods to Spielberg’s Jaws .

It’s not long before scantily clad birds are losing their legs, stag starlets are spilling their silicon implants and an unwary swimmer is being scalped by an outboard motor – one of numerous shock moments peppered throughout this gleefully gory romp.

(Others include a girl being sliced in two by a whipping cable and a penis being gobbled, then disgorged, by a picky piranha.)

It’s all trashy, splashy fun that’s both a light-hearted throwback to 3D’s exploitation roots and a shameless pandering to the Friday night crowd’s baser instincts.

Christopher Lloyd adds further yuks as a mad-eyed ichthyologist, while a final gag leaves things open nicely for a sequel/remake of Cameron’s own Piranha II .

A shame, though, that more time was not lavished on the computer-generated carnivores themselves. Indeed, a great deal of the piscine carnage is so underlit it’s hard to tell what’s going on and who’s eating who.