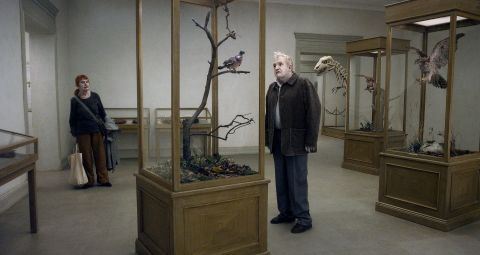 One of the strangest films you’ll see this (or any) year, it unsettles, bores, elates and amuses in equal measure. Not for everyone, but there’s plenty to chew on.

Odder than a trip to Ikea...

Completing one of cinema’s more oblique trilogies, Roy Andersson follows Songs From The Second Floor and You, The Living with this droll third episode “about being a human being”, winner of the Venice Film Festival’s Golden Lion.

Beginning with ‘Three meetings with death’, Pigeon is a series of vignettes – some of them brief, a couple hitting the quarter-hour mark – reflecting on life, death, ageing, nostalgia, debt and sexuality. The opening scene typifies what’s in store, as two pale-faced types silently contemplate exhibits in glass cases in a museum, including the eponymous pigeon.

A Pigeon will irritate as many as it delights and, even if you buy into Andersson’s singular world-view, some skits will simply pass you by. Others will have a profound effect: the sight of a monkey being electro-shocked, or black slaves being herded by English-speaking soldiers into a metallic rotating drum-like oven, their screams somehow transformed into beautiful music.

Some moments are jaw-dropping, notably when Sweden’s 18th-Century monarch, King Charles XII (Viktor Gyllenberg), stops at a café as a ceaseless procession of soldiers marches past the window. Supping a glass of mineral water, he then pays special attention to the young male bartender. Logic and cohesion don’t really apply here – Andersson’s bizarre world just wouldn’t allow it.

a pigeon sat on a branch reflecting on existence

One of the strangest films you’ll see this (or any) year, it unsettles, bores, elates and amuses in equal measure. Not for everyone, but there’s plenty to chew on.