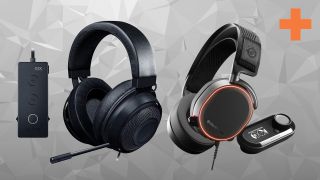 If you're on the lookout for a cheap gaming headset just in time for Christmas - I'm looking at you, all the people who are leaving it til the last minute - then do we have some deals to point you in the direction of right now. Over at Best Buy, there's a decent batch of quality gaming headset on offer, covering all consoles and devices. However, some stand out more than others.

The HyperX Cloud is currently down to only $49.99, and is a cracking headset for that 50 dollar mark. The HyperX headsets consistently rank very highly among guides to the best PC headset for gaming particularly, but they are equally excellent for console. This set is officially licensed by PlayStation and features that distinct PlayStation colorway of blue and black, making it an ideal companion and accessory for PS4 players this Christmas time.

Elsewhere, and because of the color green, Xbox players might fancy the bright green Razer Kraken, which is also currently down to $49.99. This is a hefty saving of $30 and means you're getting one of the best mid-range headsets from one of the best gaming peripheral makers out there. And, perhaps offering the best bang for buck ratio, the Razer Kraken Tournament Edition is reduced too, by a massive $45. You can get it for just $54.99 which represents awesome value.

All of these headsets have fantastic surround sound and audio detail so will suit any gamer playing any game. But, if you pushed us, we'd probably go for the Kraken Tournament Edition. It's quality probably just shades the other two, and its THX Spatial Audio means its surround sound is slightly superior. It really does offer the epitome of a cheap gaming headset, that gets you genuine quality as well, at this price.

Hyper X Cloud gaming headset for PS4 | $49.99 at Best Buy (save $20)
HyperX consistently make some of the best gaming headsets around and this one, officially licensed for PS4, is no different. A bargain and great gift price at $50.View Deal

Razer Kraken gaming headset | just $49.99 at Best Buy (save $30)
A familiar but solid and quality headset from Razer. This is the green version because, you know, Xbox.View Deal

Razer Kraken Tournament Edition | just $54.99 at Best Buy (save $45)
This is an outrageously good deal on a quality headset that'll go with anything. A great one to get just in time for the Holidays or for a gift.View Deal

You can absolutely take our word for it that these are great headsets, but if you want to compare them to the top sets of cans money can buy, head on over to our takes on the best PS4 headset and the best Xbox One headset you can get right now.

There's still time to augment tour gaming setup before Christmas - why not peruse the best gaming TVs going right now and get a top display to play on.