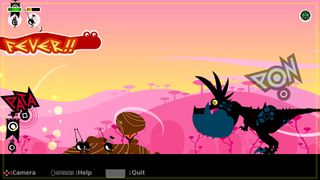 Patapon 2 Remastered couldn't have come at a better time. For one, the start of the year is barren when it comes to new releases, with the mega releases of Animal Crossing: New Horizons, Final Fantasy 7 Remake, and Resident Evil 3 still months away. That means it's an ideal period for revisiting the games that slipped you by the first time. More importantly, there is never a bad time of year to play something where the game's main characters yell "Spank their bottoms!" as they rhythmically hurl spears at anything in their path. You won't see Tom Nook doing that (well, he might if you don't keep up your payments).

Okay, so a bit of context. Patapon 2, which on the surface looks like if LocoRoco grew up and got properly into mythical history, is the purest example of rhythm-action you can get. Missions see you tap commands in time to a beat to direct the Patapons in their quest to find Earthend. Whether it's getting them to advance, attack, or defend, you hammer out commands to a beat using the face buttons. This is why I hear the words "Pon Pon Pata Pon" as I drift off to sleep at the moment, remembering the hours I've spent trying to round up resources and take on different tribes by tapping out that pattern.

As fun as that is, I never realised that Patapon 2's selling point, literal rhythm-action, is a slick surface. Within a few missions, this endearing curio becomes a surprisingly in-depth strategy game as well. You have to create units, forage for materials, and decide your ever-expanding army's formation, as well as the equipment they use. Patapon smuggles in concepts that wouldn't look too out of place in Age of Empires, all to an incessantly chirpy war cry.

As you can tell, I'm enjoying it. I've waited a fair time to play it, and this remaster scrubs the game up well enough in most areas (a few PSP-era cutscenes are noticeable by how fuzzy they look compared to everything else) to make revisiting it worthwhile. Not only is it a chance to see how well it's aged, but getting to explore a pocket of gaming history that otherwise might have been consigned to a Wikipedia page and a few underviewed YouTube videos is a win for everyone.

Fortunately, Patapon 2 isn't alone in getting this second lease of life. Wii U exclusive The Wonderful 101 has been thrust back into the limelight as creator Platinum Games is bringing a remastered version to Switch, Steam, and PS4 thanks to an already successful Kickstarter campaign. Patapon and The Wonderful 101 share some common ground. Both are arguably cult classics, whose audiences were limited by previously being console exclusives. Both are wildly inventive, taking influences and elements from different genres to create something wholly distinctive.

In the past, these games wouldn't have received a second lease of life. While it's sometimes easy to roll an eye and dismiss remasters as double-dipping, in the cases of the games that time (almost) forget, there's an undeniable joy in seeing a new audience discover them for the first time. It's been well documented how gaming has struggled to hold onto its past, in terms of older games becoming inaccessible due to hardware moving on, in ways that film and music have never quite had to. With remasters like these, the hope is that foundations are being laid for these sort of cult curios to exist for a long while yet.

Next (and next) gen?

Why such a big proclamation? As we move towards PS5 and Xbox Series X, backwards compatibility is being talked about more by both Sony and Microsoft. Microsoft has spent years adding original Xbox and 360 games to their current consoles, while Sony has already confirmed that PS5 will be backwards compatible with PS4 games.

In the short term, these moves are not surprising, as both want to keep players in their ecosystem. Microsoft has openly talked about how its first-party games will be cross-gen at the start of the Xbox Series X's life, and that means more players will be able to keep playing the games they love. In the long run, though, this points to a future where our library stays with us as we move from console to console.

That can only be a good thing for gaming, where a range of fascinating and experimental games end up falling by the wayside as it constantly moves forward in the future. Sometimes, looking back is worth doing, whether it's to chip off a bit of the pile of shame or catch up on something you missed out the first time around. Hopefully, that's a beat we can all keep marching to.