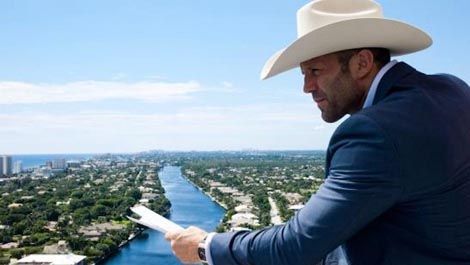 The tough-nut anti-hero of Donald E. Westlake’s crime novels has been brought to life already by Lee Marvin in Point Blank , Robert Duvall in The Outfit and Mel Gibson in Payback (among others), but now it’s Jason Statham’s turn.

An odd choice for director Taylor Hackford, the hard-boiled edge might be more than a little undercooked, but the new Parker is still plenty of violent, nasty, fun.

Statham’s mononymous crook works for a gang that likes dangerous, outlandish heists and dressing up in silly costumes.

When we first meet him, he’s a kindly grey-haired priest distracting the guards at a funfair while his cronies (led by Michael Chiklis) clean out the safe in full clown makeup.

He might be a ruthless career criminal, but he has a heart of gold, only “stealing from people who can afford it, and only hurting people who deserve it”. When someone who doesn’t deserve it gets hurt, Parker decides to quit - and his gang decide to leave him for dead.

Tracking his ex-crew down to sweaty San Antonio to take his revenge, things get messy for the Stath when Jennifer Lopez’s lonely realtor gets in the way.

J-Lo might be treading water, but Statham gets the chance to show Hollywood’s tough guys how a real man throws a punch. The answer, it seems, is straight to the face with a ceramic toilet tank lid.

Pushing the 15 certificate to its limits, Parker ’s shockingly vicious fight scenes cross Crank with Bourne , propelling an otherwise breezy, corny thriller along with the force of a shotgun.

And he’d make mincemeat out of Robert Duvall…