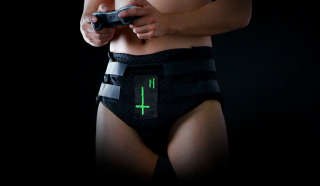 When most folks talk about a scary game causing them to "shit their pants" they're just exaggerating - even for jump-scare-filled horror-fests like Outlast 2. But if uncontrollably defecating yourself from fear is a real concern, or if you just want one of the strangest video game collectibles ever created, developer Red Barrels has a new Kickstarter with your needs in mind. Presenting… Underscares.

Yes, this is a real project. If Red Barrels meets its funding goal, it plans to create an Outlast 2 branded line of adult diapers and ship them out to backers. Granted, all the backer tiers for pre-made diapers also come with a Steam key for the game, which is set to be released in early 2017. But that's a pretty expensive way to pre-order if you're not also interested in strapping on a pair of black-and-venom-green incontinence aids.

And yes, they're washable.