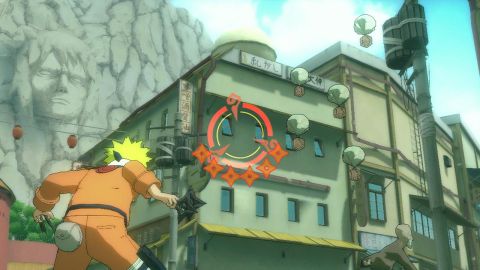 Naruto: Ultimate Ninja Storm is without a doubt the prettiest Naruto fighting game we’ve yet seen. Thanks to the power of the PS3 (and a required 4GB install – these have to stop), it’s every bit as crisp and colorful as the Naruto anime – and the game moves a lot more smoothly, too. Special attacks are spectacular. The camera is smooth and almost always provides a great view, and what voice work there is sounds wonderful.

As a fighting game, this is more of a one-on-one brawler than a technical fighter. Whereas most fighting games have at least two, if not three buttons that execute any number of punches and kicks, Naruto: Ultimate Ninja Storm gets by with a single button for physical attacks. Press it once, and you’ll swipe at an opponent’s face if you’re close enough. Hammer that button repeatedly, and you’ll pull off combos. Oh, and it’s also the special attack button as well.

Tactical challenge instead comes from your ability to maneuver around the large arenas and in how you use the rest of the buttons. They execute leaps, charge chakra power which is then used to unleash bombastic special attacks, throw projectile weapons like shuriken, call in other characters to run in and pull off a fancy support attack, and block.

Believe it or not, blocking is probably the most important of these abilities. If you just hold down the block button, your defense will eventually fail and leave you stunned. But if you tap it at the right time, you’ll not only avoid taking damage, you’ll perform a special move that teleports you behind your attacker – that’s the perfect place to see if you can fit your fist through the back of his or her head. In fact, this counter is a little too effective and actually makes physical attacks a bad strategy if you’re fighting a human opponent with decent reflexes. This oddity can give head-to-head battles a strange feel.

Where the game stumbles is in its mission mode, which drags you through 100 missions that follow a stripped down version of the anime’s plot, from the ninja exam to the bit where you’re trying to get Sasuke back from Orochimaru. Many of the moments, like when you find yourself controlling Tsunade and her spirit animal (a giant slug) against Orochimaru and his humongous spirit snake, will raise the hair on your arms. Others, like when you’re running up trees or playing hide and seek, will have you bored enough to rip the hair out of your own head. But you have to slog through them all, good and bad, to unlock all of the game’s 25 playable characters.