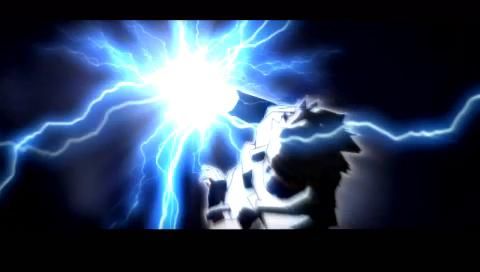 Not even publisher Namco seems to be sure as to whether this arcade-style fighting game needs the subtitle "The Phantom Fortress" - it appears on the box art, but not the in-game splash screen, and both ways in the manual. But whatever you call it, Naruto fans will want to pick it up. The problem is that most will already have the originalNaruto: Ultimate Ninja Heroes, released less than a year ago. And we're not certain three new characters, a few new moves and a new story mode are enough to warrant purchasing the same game a second time.

The button-mashy brawling here is just as compelling as it ever was. The controls are simple - it's mostly hammering the circle button and tapping the d-pad. That said, the bombastic special moves are cool to see - especially the new ones like Naruto's Vermillion Rasengan and Sasuke's Ultra Fire Bullet - and the combat flows nicely.

But as we've said - all that was already there. What's new, exactly? Well, in addition to some new special moves, there are three new characters: 3rd Hokage, Ino, and Shizune. All three have appeared in the PS2 Naruto: Ultimate Ninja series upon which this is based, but it's nice to have them in portable form.

Also, there's a meaty new story mode, which involves that Phantom Fortress mentioned in the title (or not). It's a magical floating fortress that sucks the vitality from people around it, so when it starts hovering over Naruto's hometown, that's a problem. The way to fix it is by charging through one floor of the fortress after another, beating the ectoplasm out of ghost-like fighters the building itself seems to be conjuring (they're inspired by people's memories, which neatly explains why they conveniently look and fight like other characters from the Naruto universe).

This actually adds quite a bit. First off, it's nice to have a goal. Plus, you tend to have several characters in your entourage, so you can swap fighters from time to time, and some rooms don't require fighting at all - you might find yourself climbing trees, playing a shell game, hitting the slots, taking quizzes or doing a Simon says-like "Shadow Possession" game. Finally, you win points to unlock new goodies and character upgrades, and there are around 100 floors, so it'll keep you busy for awhile.

This brings us to a weird conclusion. There's not a ton of difference between this and the first Naruto: Ultimate Ninja Heroes, but the enhancements that are here make this a notably better game than the first. We recommend it, but it's a real shame that so much of this will be a bit too familiar to most players.