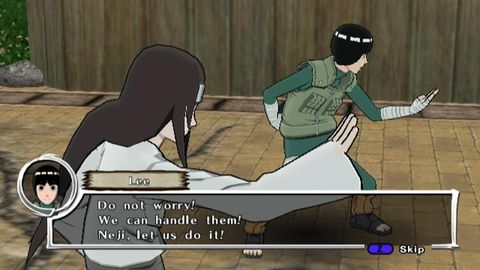 Slaying dragons is one of those things that games should always do well. The ingredients are simple - cool characters and big ass, fire-breathing dragons. But when the dragon-slaying recipe includes sluggish framerates, shallow character development, and controls made nearly impossible thanks to difficult camera angles, then you get something to the effect of Naruto Shippuden: Dragon Blade Chronicles.

Dragon Blade Chronicles acts as a branching narrative to the original Shippuden storyline, this time having you take on five elemental dragons before some giblet-head named Kuroma uses them to destroy the world. It may sound like a run-of-the-mill plot, but the game has a surprisingly good story despite its many shortcomings.

But even though the plot can be compelling at times, it does not necessarily mean it’s a particularly enjoyable one to play. For starters, the cutscene dialogue takes forever to digest. After one character finishes speaking, the game pauses for a second before allowing the next line of dialogue to continue. It’s a minor annoyance, but the seconds add up quickly considering the game relies heavily on long, boring cutscenes. And since the game has no clear objective markers during play, you easily lose track of where to go should you skip over the cutscenes.

When you're finally given the chance to play, Dragon Blade Chronicles drowns out any fun with lifeless enemies and complicated camera angles. Each time you enter a new area, the fixed camera position changes up, thus jeopardizing your sense of direction. And because the environment suffers greatly from repetitive design, backtracking through the levels happens more often than it should. As if this wasn't frustrating enough, the changing camera positions make it more difficult to gauge the depth of your movement, with jumping off ledges becoming a painstakingly common occurrence. Ninjas just don't look cool when they skip off a cliff.

Quite possibly the most discouraging part of the game is its sluggish framerate. And wow, is it slow. The game runs smoothly when there’s nothing exciting on screen, but the minute a couple of enemies burst into view, the framerate slows down tremendously. Shockingly, the game performs slightly better during the dragon boss sequences, but framerate issues are still mildly apparent.

Apart from the elemental dragons, the enemies are few and extremely repetitive. Since the game cannot support more than a few AI at once, the enemies are dispersed out of thin air and appear in waves as you defeat them. This makes the game feel scripted and embarrassingly sterile. Unfortunately the enemies are also cued to reappear every time you accidentally walk through an old section of the level, leading us to believe that Naruto isn't a hot-headed ninja, but some raging adolescent trapped in a twisted nightmare world. We would have much preferred to see a wider range of enemies with a more physical presence in the environment, but maybe that’s too much to ask for from a game chock-full of dragons and ninjas.

Sadly, there’s not a whole lot going on in terms of graphical prowess here - the game looks and feels like a mid-generation PS2 title. Much of the story converges on Mount Koryu, but this important landmark of the game turns out to be a sucking heap of polygons that does nothing to inspire a sense of enormity. And that’s the biggest lesson to be learned from this disenchanted title: if you're going to make a game with ninjas and dragons, it better be larger than a mountain and a couple of rock textures.