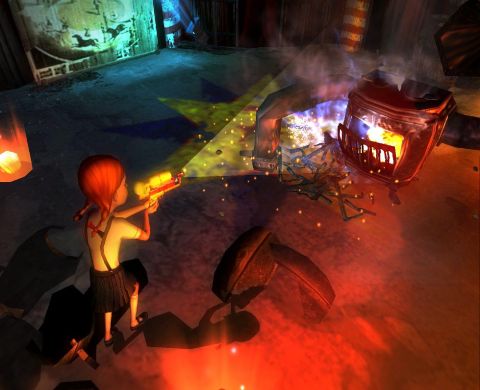 Like the animated movie it's based on, publisher THQ's Monster House attempts to offer all the frantic frights of Halloween... in July (arguably the second most frightening month of the year). Ultimately, the game ends up being like most summer movie releases - a bit fun, but ultimately forgettable. Monster House isn't offensive, but at the same timeit doesn't have anything to make it stand out from other action-adventure games. It's a very average title that willseem above-average to kids and fans of the movie.

Monster House tells the tale of youngsters DJ, Jenny, and Chowder as they tackle their neighborhood's ominous house (that gobbles up people). Armed with water guns and other knickknacks, the kids must defeat evil household items, explore the innards of the dastardly domicile, collect objects and occasionally tackle other, muchlarger household items.The action and exploration aren't terrible, but they aren'tterribly exciting, either. (On a side note, it's nice to see staple cartoon archetypes make their way to the videogame world; few games let you play as the whitebread hero, the goofy fat kid and the acerbic smart girl.)

The developers did a surprisingly good job at making the three playable characters feel distinct. DJ has average speed and firing power. Jenny moves and shoots the fastest, but her gun isn't as powerful. Being the fat kid, Chowder is the slowest, but also has the most powerful gun. Each character also has a unique secondary weapon and melee attack. It's a shame that the developers didn't flesh out the gameplay and level design to take advantage of the character differentiation.

In addition to the thrills of mowing down monsters with a water gun, Monster House offers some light puzzle elements for variety. Most of them are simple lock-and-key puzzles where you'll have to find object X in order to unlock area Y. There are also some sections where you'll have to move crates (a favorite pastime of many 10-year olds) in order to reach certain objects or areas.

One clever movie tie-in is the inclusion of Thou Art Dead,a simple arcade gamefrom the film that playslike a dumbed-down version of Ghouls 'n Ghosts. It's a cute little diversion that adds a teeny sliver of value to the game.