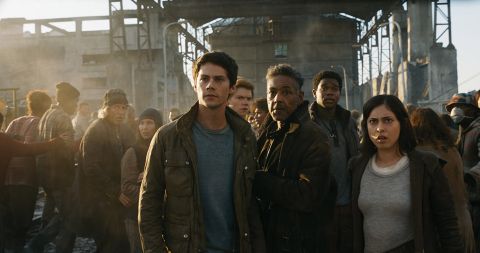 It’s hardly fresh, but the spectacle is decent and the relationship dynamics absorb just enough to fill the lengthy run time.

“This is a long way from the Glade,” says teen hero Newt (Thomas Brodie-Sangster) to Thomas (Dylan O’Brien), Brenda (Rosa Salazar) and their ragtag pals while staring at the walled city they must infiltrate in order to rescue pal Minho (Ki Hong Lee) and bring down WICKED, the corporation who experimented on them like lab rats.

Yes, it is a long way, and unfortunately this YA franchise has become less interesting and more formulaic with each instalment as it’s opened out from its contained, high-concept beginnings.

Still, this trilogy closer (thankfully James Dashner’s book has not been split in two) is solid enough, opening with a rip-roaring train heist straight out of a western – albeit with an armed chopper hovering above – and climaxing with all-out war raged on the last city standing in the scorched, post-apocalyptic landscape.

In between, there are run-ins with virus-infected Cranks and a quick dream sequence to plonk us back into the original’s maze with a biomechanical Griever in hot, slobbery pursuit.

The dramatic beats and themes of loyalty, sacrifice and blessed vs. dispossessed are familiar, but Aidan Gillen, Patricia Clarkson and Barry Pepper return to add gravitas, and are joined, though all-too briefly, by a pustule-faced, noseless Walton Goggins.

Maze Runner: The Death Cure review: "It's hardly fresh, but the spectacle is decent"

It’s hardly fresh, but the spectacle is decent and the relationship dynamics absorb just enough to fill the lengthy run time.