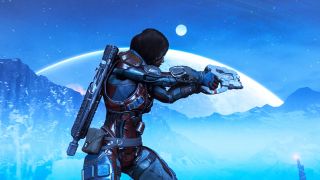 While Mass Effect: Andromeda is a fresh chapter for the franchise, there are plenty of nods and references to the original trilogy for those willing to look hard enough. After all, the games do exist within the same universe (not the same galaxy, though), and it’s inevitable that the main characters of the first trilogy will have touched the lives of the main characters of the Andromeda Initiative. With that in mind, I’ve scoured the game for every reference and hidden Easter egg I can find, and there is some great stuff in here. If you’re looking for more general advice, swing over to our Mass Effect: Andromeda tips and tricks for assistance.

There are definite spoilers ahead.

This is probably the first thing you’ll find, as you’re funnelled towards Alec’s quarters when you first ‘meet’ SAM. The model of the Normandy itself - which is Commander Shepard’s ship in the original trilogy - is sitting on the shelf of the corner desk, and you’ll see it when you first walk in. Once picked up, it lives on a shelf in your Pathfinder’s quarters on the Tempest.

This one is a little trickier to find. Head over to Kadera. You’re looking for a mission called ‘Mind Games’ which you may have already activated by scanning a bunch of alien species near the entrance to the open area of the planet. You’ll find two scientists at the source of the signal you’re required to track, and you’ll discover they’re scientists who were kicked out of Cerberus before signing up to the Andromeda Initiative. Check the datapad in the same room for an email that talks about the Illusive Man, Miranda Lawson, and a bunch of other Cerberus types.

'The Firefighters' questline directly references the Overlord project, which Shepard shut down in Mass Effect 2: Overlord. This piece of DLC is about a virtual intelligence that goes rogue, something that fits very neatly into Andromeda, which has a heavy focus on AI and the way people react to it.

Did you know you can Research and Develop N7 armor on board the Tempest? It’s the same stuff Shepard wears in Mass Effects 1-3. Simply head to the crafting console and Research it using Milky Way points, before Developing the finished items. There’s a full guide to grabbing Shepard’s N7 armor here, including what colors to choose too.

Emails from Liara to Alec Ryder (in Alec’s quarters)

Remember Liara T’soni? She’s an Asari scientist who appears in all three Mass Effect games, frequently as an actual companion on board the Normandy. You’ll find audio logs and emails from her to Alec Ryder if you explore his quarters on the Nexus. It’s a lovely little link between the games.

In addition to messages from Liara, there are references to the Shadow Broker on Alec's terminal when you unlock certain logs by collecting memory fragments. They’re little more than references, however, and there’s nothing massively revelatory to learn. I assume they refer to the pre-Liara version of the Shadow Broker, as that makes sense to the timeline (she only becomes the Shadow Broker in Mass Effect 2, but the Arks set off for Andromeda between ME and ME2).

This one is very much a fan-fave. Kandros, the head of the militia on the Nexus, is a cousin of Nyreen Kandros, who appears as a temporary squadmate in Mass Effect 3’s Omega DLC. She’s also the first female Turian in the series, and this is BioWare’s subtle call-back to the character.

There’s a quest on desert planet Elaaven that sends you after Dr. Okeer's research. Okeer is the Krogan scientist who created Grunt while trying to cure the genophage, which you’ll probably remember from Mass Effect 2.

There are multiple jokey references to Blasto the fictional Hanar Spectre in logs throughout the game. The Milky Way exhibit in the museum on Aya has a box of Blastos, the breakfast cereal based on him, too. Nice one, BioWare.

All of the 'history' codex entries for each Milky Way species feature a picture of an original trilogy companion - Liara for Asari, Garrus for Turians, etc. It’s a neat little Easter egg, but also makes sense in terms of the universe, as these characters would probably have been the most famous examples of their species.

Head to Havarl and you’ll meet a Turian ex-Spectre (during the Turian Ark: Not Dead Yet quest), who was a protege of Saren (from the original Mass Effect). He’ll chat to you about the character and explain how he didn’t think Saren was crazy. This lines up with the fact that Saren only betrayed the Council because he was under the influence of the Reapers.

Lots of the Nomad skins are references to nicknames and colorschemes from the original games. Archangel is Garrus' colors, for example, and the codename he uses to disguise his identity at the start of Mass Effect 2.

Ok, seriously, there are some MASSIVE spoilers here. First you need to collect every Memory fragment on each of Andromeda’s five planets. Once your sibling is awake, you can then head to the Hyperion to access the final memory. This one is set on the Citadel, a short time before the Arks leave. According to Mass Effect’s timeline it’s in between ME1 and ME2. Alec Ryder is contacted by a Turian who turns out to be Garrus' father. He explains that his son is working with somebody called Shepard, and Shepard has verified that the Reaper threat might be real. The mysterious benefactor of the Andromeda Initiative (introduced in one of the earlier memories) fast-tracks the project in order to get the colonists out of the Milky Way before the Reapers arrive. It's heavily implied elsewhere in the game that the benefactor might be the Illusive Man, which would make the Initiative a Cerberus project.