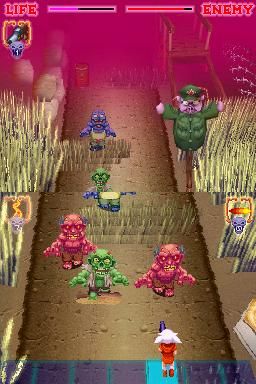 In an arcade-style game, anything that requires the player to take a break from shooting is a questionable call. We’re okay with reloading, but handicapping us with awkward controls is just uncool.

This is especially true in Little Red Riding Hood’s Zombie BBQ, because as you get deeper into the game, fewer and fewer enemies appear on the top screen. No, they’d rather pop up on the bottom screen, maybe even directly in front of Red and maybe in groups of three or more.

Sure, you can dodge some of them (possibly) because they often just walk straight down and offscreen. But the point is you’re going to have less and less warning that your life is in danger, and the gimped controls constantly handicap your ability to actually shoot the enemies.

Oh, and if you want to duck to avoid an attack? You don’t press down on the D-pad, even though that isn’t used for anything. No, you need to tap your actual character. Which requires you to stop … well, you get the idea. Basically, by the time you notice that Red has a French-ish accent in the limited voice-over moments but speaks in a typical teen-ditzoid accent in all her, like, totally awesome written dialogue, you’ll be too worn down by other flaws to gripe about it.