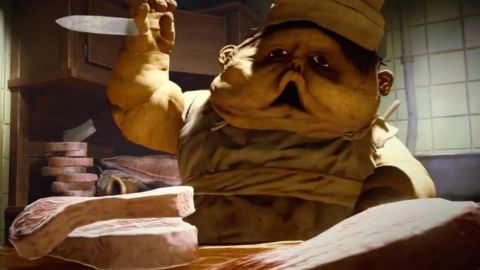 At times mechanically clumsy, but artistically sound, Little Nightmares might get on your nerves every once in awhile, but its imagery will burrow into your brain and never leave.

You are what you eat. If there is a theme running throughout Tarsier Studios' Little Nightmares, this is it. The stealth-heavy horror game takes the familiar adage and spins something new, something monstrous, something ugly out of it. And if you're the type to lean forward to hear a ghost story instead of hiding under the covers, it's a must-play.

At first blush, it's easy to think of Little Nightmares as a Limbo-like game: you are a small, presumably young, character surrounded by creatures and traps that can instantly crush your feeble bones. You run mostly left to right, pulling levers and swinging on ropes to reach the next area. But where Playdead's moody game is more concerned with puzzles, Little Nightmares often challenges you to play a deadly game of hide and seek. You'll catch the eye of some creature, then sprint to a nearby table, ducking under it to evade capture, inching bit by bit toward freedom.

If you like a bit of mystery and effort on your end to decode what's happening, you'll enjoy Little Nightmares' obtuse approach to storytelling. Especially toward the end, it reminded me of Studio Ghibli's Spirited Away, if Spirited Away was grotesque and horrifying. But if you want a clear explanation of what's going on, Little Nightmares won't give you that.

Either way, your time spent in this strange realm will not be particularly long. I beat it in roughly four hours, though you could get a bit of extra mileage if you wanted to hunt down the collectibles which unlock some truly disturbing concept art. But at the same time, it should be noted that it doesn't feel like any of that short runtime is wasted. Just as you start to feel comfortable or safe with the enemies you're evading, the game throws something new at you. There's no padding or filler to slow things down - unless you get stuck on a puzzle or run into a poorly-paced checkpoint, as I did a handful of times.

The problems, when they come, stem from mechanical imprecision. In one instance, I was being chased by a misshapen creature I dubbed ‘Slinky’. The pursuit unfolded through several rooms, with a daring jump at the end to escape. The first time, I failed to slide under a pipe and was caught, sending me back to the beginning of the chase. Fair enough, that was my fault for not reacting fast enough. But the second, third, and fourth times, where I failed due to getting caught on scenery, not jumping as far as I thought I should've, or not grabbing onto ledges I should've grabbed onto, were much more frustrating. These were also farther from the start, yet I had to do the entire beginning sequence over and over.

This wouldn't be an issue if the appeal of Little Nightmares was its difficulty. But this is a horror-focused game, and you can't be repulsed if you're frustrated. By the time I finally cleared that particular sequence, I didn't feel relief at having escaped my pursuer so much as I relief that I wouldn't have to sit through another loading screen.

In another instance, I couldn't figure out how to escape a closed room. There were, as far as I could tell, only two objects I could interact with, but nothing to do with them. I found out later from a fellow reviewer I had to throw one of the objects at a specific button. The thing is, I'd tried that, but because I didn't do it in exactly the right way, the game didn't count it. Similarly, the time I tried to pry pieces of an object out within time constraints, but my character repeatedly didn't grab the thing I wanted her to grab. Most of the time, Little Nightmares' controls work fine. But they're not precise enough to demand the player be precise with them, and so they can sometimes lead to what feel like cheap deaths.

Thankfully these spots are few and far between, and a day-one patch has significantly lowered load times. What was at times a teeth-grinding annoyance for me should be a minor inconvenience for those who pick up the game on release day.

Speaking of teeth grinding, it's clear that developer Tarsier Studios spent an extraordinary amount of effort on Little Nightmares' sound design. You can hear dull fangs slide across one another as a monster clumsily licks its lips. The roars and moans of the creatures are guttural and disgusting, like a burp that forms in the back of your throat before you vomit. And I'm 90% sure Slinky's breathing has the same sound as the xenomorph Queen's from Aliens. Even the sliding of a chair or the opening of a drawer can cause alarm - so much of Little Nightmares is a game of hide and seek, and the uncomfortable loudness created simply by moving about the environment can make you fear that some unspeakable thing will hear you, seek you out, and catch you.

You've seen these things in screenshots and trailers, but I'll tell you: you don't know how grotesque they really are until you see them moving about in the environment, their unnatural gait and violent movements impressing upon you the predatory ferocity they possess. I don't think I'll ever be able to scrub the image of a gluttonous chef slamming a cleaver into a slab of meat - then prying it apart with his hands, each of his grubby fingers digging into the soft flesh as it cracked and tore.

This sort of repulsive, uncomfortable design is present throughout. Doors are far too big for you, but are also too large (or small) for some of this world's denizens. A human hangs from a noose next to a chair, but the chair is only as large as one of his feet. Rooms that shouldn't physically exist sit next to one another. It's all just familiar enough, but twisted and impossible enough, to instill a sense of unease and dread.

And that's where Little Nightmares succeeds. Mechanically it has issues holding it back, and I expect most players will experience a few bumps along the road. But even in light of those occasional setbacks, its artistic chops make it stand apart as one of the most disturbing and unsettling games I've ever played.

At times mechanically clumsy, but artistically sound, Little Nightmares might get on your nerves every once in awhile, but its imagery will burrow into your brain and never leave.