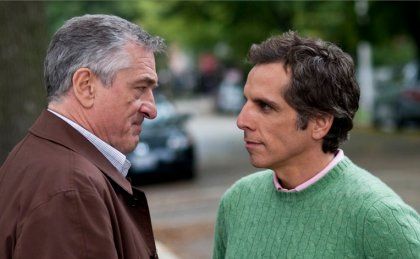 A decade on, Stiller gets his own back by inserting a hypodermic needle into the old man’s member.

Go see Little Fockers and chances are you’ll feel a prick, too.

A cynical attempt to extend a lucrative franchise beyond its natural life, this third helping of familial strife heaps humiliations aplenty on both Stiller’s Gaylord Focker – now chief nurse at a Chicago hospital and dad of twins – and De Niro’s Jack Byrnes, a former CIA operative now suffering heart problems.

Where once these might have tickled the funny bone, they now smack of mean-spiritedness, a gruesome turkey-carving mishap setting the tone early. Not that Ben and Bob are the only actors put under duress in Paul Weitz’s movie.

Jessica Alba gets her share of low comedy as a randy drugs rep who tries to seduce Stiller in her scanties when not helping him give a patient an enema.

The story? Not much to speak of, revolving though it does around De Niro’s decision to make Greg the “God-Focker” of his precious clan at a time when he’s trying to finish his new home, get his kids into a posh school and send his wife’s (Teri Polo) super-rich ex-beau (Owen Wilson) packing.

Yet such sitcom-like details don’t stop it feeling all rather arbitrary, an impression heightened by redundant cameos from Barbra Streisand and Dustin Hoffman as Stiller’s wackjob parents and a completely bewildering one from Harvey Keitel as his testy contractor.

That Ben’s shown hawking erectile dysfunction medication behind his wife’s back seems doubly ironic given the limp plotting and flaccid set-pieces.

And while some may titter at the idea of watching him and De Niro go mano a mano on an inflatable castle, it soon becomes painfully evident that the bounce this series once had ran out with 2005’s Meet The Fockers .