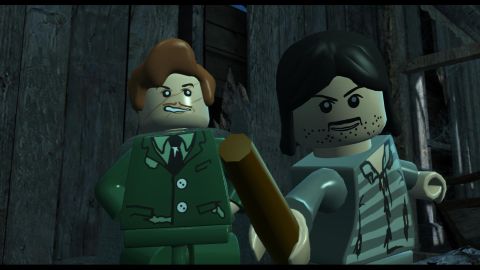 You get a rough time of it as a Harry Potter fan, not least if you’re a Harry Potter fan over the age of 12. For most people this involves hiding your literary shame by buying the ‘adult’ versions of the books (no, we’re reading Dostoyevsky’s Konstantin Potter and the Goblet of Dense Russian Prose) or obscuring your replica lightning-bolt scar under a shaggy haircut and a porkpie hat. For those of us who quite fancy running around Hogwarts and blasting Dementors in the face, we’ve had to endure worse: a series of lame, lazy or frustratingly not-quite-there games, all of which failed to make the most of Potter’s wizarding world.

LEGO Harry Potter gets it. It gets that even though students aren’t allowed to zap Snape in his smirky face, we’d rather enjoy doing this in the game. It gets that we want to play as Dobby or Griphook or Hermione’s cat even if they weren’t in that part of the book. It gets that although it might be hard to program the many locations Harry visits, we want to go to Hogsmeade and hurl snowballs at Malfoy. Traveller’s Tales has worked overtime to cram in nearly every location or activity you could desire, and filled them with students to levitate, tables to smash and things to repair with the aid of magic.

This feat is even more impressive considering this is four stories in one. The first four Potter books/films are condensed, LEGOised and parodied, albeit in a hugely affectionate and knowledgable manner. Even though they had a game to each film, EA’s ‘official’ titles never dealt with the plot satisfactorily, skipping over huge chunks or subplots if they didn’t fit whatever concept they’d whisked up for the latest game. LEGO Harry Potter relates all four stories in a necessarily brisk and squished fashion, but still manages to cover all the basics, summing up the stuff it didn’t have time for with a comic gesture or knowing nod.

It’s an approach that will be familiar to anyone who’s played any of the previous LEGO games, but it feels particularly satisfying watching the increasingly *sigh* ‘dark’ Potter series handled in such a light-hearted way, and with impeccable comic timing and wit. We spent most of the game wondering how it would deal with one of the books’ darkest moments – the sudden death of one of the characters – but the result was far funnier and smarter than we could have anticipated. When your cast is made out of detachable bits of plastic, it would be ridiculous to have it any other way.

With four books to get through, the story really barrels along. One minute you’re jogging down a hallway, the next Hagrid appears bearing triangular lumps of green plastic, and suddenly everyone’s sporting Christmas hats. Discounting the hours you’ll devote to mucking about with the environment, expect to spend around three to four hours in each year – if you do succumb to LEGO Stud Syndrome, it’s probably better to measure your time in dog years. There are six stages to each book, but that doesn’t include lessons, or the expansive, blocky Hogwarts you get to explore between each one.

Traveller’s Tales has learned some lessons of their own, too. The massive hub of LEGO Indy is out, replaced with more manageable chunks of world that are nonetheless ripe for exploration. Hogwarts itself is perhaps slightly smaller than the largely open world of EA’s Order of the Phoenix, but it contains more worthwhile stuff to do. The gazillions of LEGO studs you’re invited to acquire can be used to purchase characters, cheats and a surprising number of additional spells, including one that expands peoples’ heads to comical size. Of course, unlike EA’s game, LEGO Harry Potter contains a wealth of other locations too.

When he's not dying repeatedly in roguelikes, Tom spends most of his working days writing freelance articles, watching ITV game shows, or acting as a butler for his cat. He's been writing about games since 2008, and he's still waiting on that Vagrant Story 2 reveal.