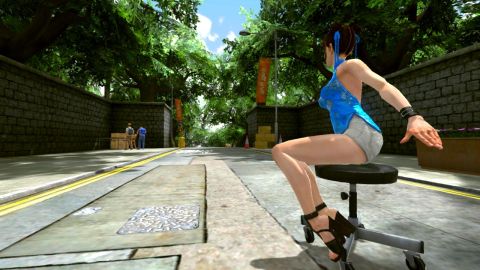 Rarely has an idea so flagrantly, joyfully batshit crazy-awesome been turned into a game containing such an inverse level of excitement. You play as a kung fu kicking private eye escaping a cartoon Yakuza through the winding streets of a Japanese city, with only the likes of wheelie office chairs and shopping carts as transport. It’s one of those ideas that should be resolutely unable to fail as a game, but alas, thanks to fairly dull level design and stilted gameplay, it never lives up to the glorious array of images that the above synopsis has just put in your head.

Above: Unbelievably not as much fun as it looks

While the Move controls work well enough – albeit never in a way that will convince you that this couldn’t have played just as well with a Dual Shock – what you get to do with them just never becomes terribly interesting. You’ll mime a punting motion to accelerate, swing Move left and right to steer, flick it up to jump, and use various button combinations for fighting and limboing under objects. But despite the supposed variety of nonsensical action to enjoy, the resounding memory that Kung Fu Rider will leave you with will be one of plodding down a an array of nigh-identikit streets trying to avoid things while awkwardly bouncing off walls.

The game tries to mix things up by throwing in tightly-placed bonus gates, hidden branching routes and aerial grind-rails, but the game never really flows fast or smoothly enough to properly invoke the spirit of SSX that it’s clearly trying to recreate. At times, Kung Fu Rider’s knockabout silliness, likeable presentation and ragdoll violence do combine to be rather a giggle, and if you do get into it there’s replay value to be had through finding different routes and perfect riding lines for big scores, but overall there’s just not enough going on here tojustify the £29:99 RRP.