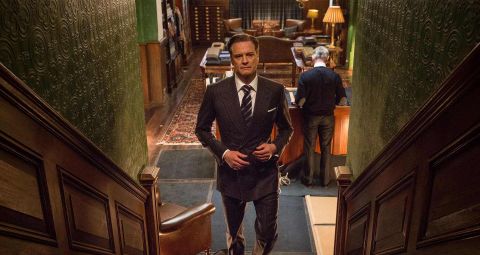 The Middle East. A helicopter roars across the screen, firing two missiles at its fortress target, as Dire Straits’ ‘Money For Nothing’ booms across the soundtrack. Say what you want about Matthew Vaughn, but he knows how to get your attention. Setting the tone for what’s to come – a good old-fashioned rollicking spy film – it’s an opening that showcases what he does best: blockbuster values spiced with British irreverence.

His third comic-book adaptation in a row, Kingsman: The Secret Service returns Vaughn to the creator of his first, Kick-Ass’s Mark Millar. While Kick-Ass riffed on superheroes, Kingsman – based on Millar’s 2012 comic series The Secret Service – takes on the superspy. Inspired by old-school James Bond and others, it flaunts a yearning for the days before 007 got all serious and rebooted his dinosaur image.

With regular scribe Jane Goldman, Vaughn changes the mechanics of Millar’s plot whilst preserving the essence of a story revolving around elite espionage team Kingsman (secret base: Savile Row). Our guide into this world is Harry Hart (Colin Firth, brilliantly cast), who looks more Harry Palmer with his dark-rimmed spectacles than he does 007 (and in one of the myriad self-referential nods, the original Palmer, Michael Caine, plays Harry’s boss).

Hart, though, is not our main man; teenage tearaway Gary ‘Eggsy’ Unwin (Taron Egerton) is. Turns out that Eggsy is the son of a fellow agent, who died back in that Middle East opener, due to a mistake made by Harry. Raised on a council estate by his mum, Eggsy’s heading for reform school if he’s not careful. Thankfully, Harry’s kept an eye on him, even giving him a number to ring if ever he lands in trouble. After a big joyride, and a spell in police custody, Eggsy finally dials the digits.

Coming to the rescue, Harry takes Eggsy under his wing. “We are first and foremost gentlemen,” he says, and one of Kingsman’s delights is watching the plummy Harry tutor the hoodie-wearing Eggsy. Think My Fair Lady meets Moonraker and you won’t be far off. With the agency a man down after an agent is killed, Eggsy is put forward for intensive training up against Oxbridge toffs – though he does make an ally in the resourceful candidate Roxy (Sophie Cookson).

Some of these scenes, as we briefly detour into The Apprentice territory, are among the film’s best, with Mark Strong’s Celtic-tongued agent putting these applicants through their paces. A restroom turns into a rapidly-filling water tank; elsewhere, a collective skydive becomes a frenzied freefall (with one candidate minus their ’chute). Amid this teamwork, the trainees are even made to nurture a puppy each, with Eggsy naming his pooch JB. “James Bond? Jason Bourne?” he’s asked. “No, Jack Bauer,” he replies.

Like Millar’s original, Kingsman is deliberately, defiantly self-aware – although Vaughn tones it down. While Millar’s story saw a series of celebrities kidnapped, opening on a scene with Mark Hamill plunging to his death, Vaughn ditches the famous faces – though he does retain Hamill, cast as a bearded boffin snatched by Kingsman’s main villain, biotech pioneer Valentine (Samuel L. Jackson).

It’s here where Kingsman has its fun, returning us to the old “far-fetched” James Bond films, with gadgets, guns and girls. As we’re told, those films were “only as good as the villain”, and Jackson’s lisping baddie – with an outlandish plan to control our minds via mobile phones – is good value, even if he’s not quite on the Blofeld level. Even better is his henchwoman, Gazelle (Sofia Boutella), who slices up her opponents with her ‘blade runner’-style legs (a sort of Oddjob Pistorius, if you will).

Amid all this, Firth is a revelation in what is his first real action role, dispatching thugs with his umbrella like a jacked-up John Steed. But it’s his relationship with Eggsy that draws you in. In a sense, the plot – like many of the Roger Moore-era Bonds – is a bit daft, and when that takes over in the final third, Kingsman loses some lustre. As good as Egerton is (especially considering the contrast to his performance in this month’s Testament Of Youth), he’s not quite able to sustain our interest for two hours.

Vaughn, however, has hit on a fantastic twist on the action movie – a pinch of Lock, Stock cheekiness blended with a dash of ’80s retro (even quoting Trading Places). It’s not perfect – a late-on crude sexual play by Eggsy seems right out of character – but there’s enough here to keep the blood pumping. Like the moment Harry apologises for a violent outburst – “needed to let off a little steam,” he says – Kingsman feels the same. Largely, it pushes all the right buttons.