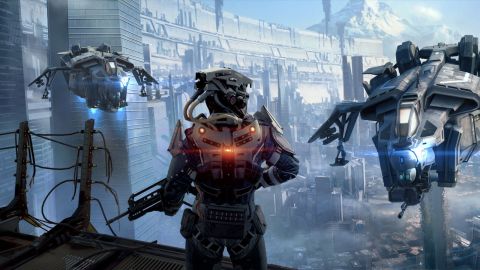 There I was, gleefully shooting red-eyed Helghast to bits when I came across a regular Helghast citizen whose dead wife was draped across his lap. He sat there, crying his unmasked, normal-looking eyes out, going on and on about how all of this--the fighting, the dying, the being alive--was just so goddamn pointless. He looked up at me, with next-gen tears streaming down his next-gen face, and begged me to put an end to his suffering. So I did.

My decision didn't have any effect on Killzone: Shadow Fall's resolution, nor did it shower me in morality points to let me know that what I did was the Right Thing To Do. The scene simply existed alongside others like it, each aimed at making the player feel more invested in the ongoing conflict and its collateral damage. Not all were successful--some felt more forced than sincere--but they lent a surprising amount of humanity to an all-around enjoyable first-person shooter, something many of Shadow Fall's competitors lack.

Set some 30 years after the events of Killzone 3 (which SPOILER ALERT ended with the Helghast's home planet getting casually nuked into a lifeless rock--yay, war!), Shadow Fall creates a palpable sense of tension with its Cold War narrative. Helghast survivors now occupy half of Vekta, the same planet that houses those responsible for the death of, oh, about a billion Helghast lives. Despite a shaky peace treaty between the two sides, both constantly poke at each other with sneaky espionage tactics, and as Shadow Marshal Lucas Kellan, you'll be doing the poking--er, shooting/stabbing--for the Vektans.

Not that you'll mind. The gunplay is great, even though most weapons take the form of samey assault rifles and rocket launchers, while impressive first-person animations imbue every action with a sense of weight. The gameplay here offers mostly excellent pacing thanks to its varied level design, ranging from open-ended arenas to linear space station corridors. The former is where Shadow Fall is at its best, as Kellan has access to a variety of tools that make the more expansive levels far more interesting than the comparatively bland "walk forward and shoot everything that moves" segments, which are made even more dull by occasionally shoddy AI.

Kellan's ECHO system is used to unveil and mark enemies, even from behind walls. With this, you can hide in the shadows and map out each enemy soldier's patrol route--it's an invaluable tool for planning your attacks, providing a welcome amount of strategy that many shooter campaigns neglect. Then there's the OWL, a small robot companion that stuns and attacks bad guys, places defensive shields, and deploys an unlimited number of zip-lines at your command, further adding to your offensive and defensive options. All of these things come together to create some truly awesome experiences throughout the campaign.

For example, while on a covert op in a forest, I jumped off a ledge and onto a Helghast soldier, buried a knife in his neck, wrenched it back out, and threw it with pinpoint accuracy into the eye of his BFF. THEN I zip-lined to a nearby tree stand and used my ECHO to locate a cluster of enemies chatting on the ground. After stunning them with my OWL (Jesus, these acronyms), I served them a perfectly cooked grenade. It was an immensely satisfying experience, one that can't be duplicated with a corridor jammed full of explosive set-piece moments.

Almost half of Shadow Fall's levels, though, feel too constricting, especially after stepping foot in the larger environments. With limited space to maneuver and just the occasional alternative route, the ECHO becomes largely useless outside of finding nearby items. Some of these levels--such as a mega creepy spaceship full of mysteriously dead, charred bodies--make effective use of atmosphere, placing a larger emphasis on intrigue than on strategic opportunities, but others feel painfully generic, especially in the story's final stretch.

You've no doubt heard the playback of hundreds of audio diaries by now--we all have. But when I picked one up in Shadow Fall, one thing I did not expect was it to playback through the speaker built into the controller. It freaked me out the first time it happened, but I grew to really enjoy it. The audio came through loud and clear, and it's a surprisingly different experience (in a good way!) to listen to an audiolog from a sound source separate from your TV.

Speaking of the g-word, Kellan's evolution as a character is marked by flimsy radio exchanges with his equally boring mentor. Both have fleeting moments of greatness, but these are drowned out by apathetic conversations about which conflicting superpower--the Vektans or Helghast--is in the right. More convincing are collectible audiologs and the aforementioned vignettes you'll encounter throughout the eight-hour campaign, both of which do an unexpectedly great job of world building.

Shadow Fall's multiplayer offering will keep you entertained after its 25-minute credits marathon comes to a close, though it's unlikely to permanently rip you away from genre mainstays. All the standard modes--team deathmatch, free for all, capture the flag--are present, though Shadow Fall's Warzone mode, which randomly rotates objective-based goals, is the main attraction. As ever, this mode will keep you on your toes as it transitions from Search & Destroy to Capture & Hold, among others, and each of the maps provided an interesting mix of routes to prevent bottlenecks.

Custom Warzones are a new highlight to Shadow Fall, allowing players to create and play their own shareable rulesets, providing a nice alternative to the official modes. In multiplayer, I played a custom mode called "Paranoia in the Park," where every player had a sniper rifle, an invisibility cloak, and a single life. It was a drastically different, tense competitive mode compared to the rotating objective Warzone mentioned above.

Still, when I attempted to make my own custom Warzone, I was a bit bummed that it didn't include more granular tweaks. For example, I really wanted to make a mode in which one player with a pistol had to face an entire team of players with knives, but couldn't adjust how many players each team was allowed to have--only the weapons and abilities each had access to, in addition to other modifiers including health pools, regeneration, and number of lives. A few more modifiable variables would've gone a long way toward opening the floodgates to a mass of interesting, player-made modes.

Killzone: Shadow Fall is an excellent way to kick off the eighth console generation. Sure, its characters may not be all that convincing, and its multiplayer is more a well-crafted distraction than a long-term destination, but the game as a whole contains plenty of unexpected surprises that make it worth your time. The open-ended missions, though not as plentiful as you might like, are made even better thanks to the awesome tools at your disposal, and its story has some powerful moments that are sure to catch you off guard. And even when it hits lulls, you'll still have a great time shooting to your heart's content.