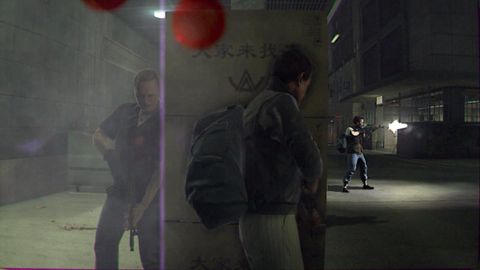 It’s hard to pinpoint exactly why Kane & Lynch 2: Dog Days isn’t a fantastic game. Its visuals are great, combining a careful attention to gritty detail with a shakycam-filled, YouTube-inspired presentation that makes it unlike any other game we can think of. The clumsy action of the first game has been streamlined into a straightforward, no-frills, cover-centric shooter that’s like Gears of War without the chainsaws (or most of the arsenal, actually), and your enemies are smart, tough and fast enough to keep you from getting too complacent behind cover.

It’s when you combine all those elements with the game’s story and characters that it starts to falter. Kane & Lynch 2 follows its titular goons – a couple of uncharismatic, intentionally unlikable criminals who spend most of the game grumbling the word “fuck” at each other – through the streets of Shanghai after a seemingly insignificant botched job leads to the entire city breathing down their necks. Oh, and this time around, you play as balding psychopath Lynch (who’s gotten his mental illness mostly under control) instead of mercenary Kane.

That’s really all you need to know, because in spite of its lavish presentation, snappy writing and stellar acting, the story – like the gameplay – cuts straight to the point: Kane and Lynch are in deep shit, and the only way to get them out of said shit is to gun down an army of cops, gangsters and soldiers. There isn’t any elaborate backstory to delve into, or even any secondary characters that stick around long enough for you to get attached. There’s no redemption, no real attempt to make the characters interesting, and no sense of triumph when they win. There isn’t even really an ending. There’s just a couple of fragile cretins you're supposed to empathize with, a bunch of dudes for them to joylessly shoot and a whole lot of dingy-but-super-detailed environments to marvel at through the game’s hazy grain filter.

If that doesn’t already sound like a good time, then you’re probably not going to find a whole lot to like about Kane & Lynch 2’s story mode.

If, on the other hand, you couldn’t give a rat’s ass about story or characters and just want a brutal, intentionally ugly, tough-as-nails shooter to slog through, then you’ll probably enjoy Dog Days for the five or so hours its story lasts. Most of what didn’t work about the first game’s action has been thrown out; the aiming’s improved, the menu system’s been simplified, and pretty much anything not related to shooting has been tossed altogether rather than improved (so long, rappelling).

What’s left is a fine-tuned (but occasionally finicky) sticky-cover system that allows for blindfiring, a simple two-gun inventory (which you can fill with a wide array of pistols, submachine guns, shotguns and assault rifles) and the ability to take human shields if you can get close enough to an enemy without them just killing you. It’s also pretty common, when you’re near death, to get knocked to the ground, which momentarily takes you out of your enemies’ direct line of fire and gives you a chance to gun them down before they realize what’s happened. Or to scramble back behind cover so you can regenerate your health. Whichever.

Above: Gamertags blurred to protect the traitorous

There aren’t any grenades, though, and that’s kind of a pain in the ass, because there are plenty of moments when you’ll face down a swarm of bad guys and desperately want to use one. Instead, you’ll have to rely on finding things like fire extinguishers and propane canisters, which can be picked up, thrown and detonated with a shot. The nice thing about these is that you don’t have to aim to detonate them; wherever they land, your next shot will make them explode.
That just leaves Kane. Unlike in the first game, you’ll never issue your partner commands; instead, he’ll just follow you around and aggressively gun down whatever enemies he sees. He’s also more or less unkillable, so you never have to worry about rescuing him from bad situations – except for the one time that you do.

While Dog Days is mostly about Kane and Lynch thudding their way through one crowded firefight after another, it takes a few interesting detours, although these are rare. Twice, you’ll briefly fight alongside a squad of allies who soak up bullets for you. Another time, you’ll need to sneak around naked, unarmed and bleeding to rescue Kane and find a gun. And at one point, you’ll snipe masked bad guys who are trying to snatch Lynch’s girlfriend off a balcony, one of the few points at which the duo fight to protect anyone but themselves.