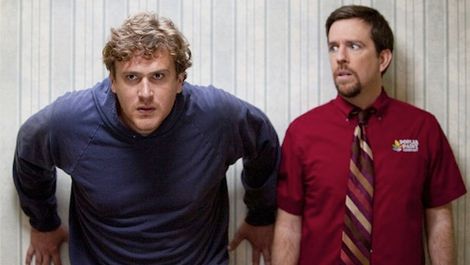 Fresh from singing and dancing with Kermit, Jason Segel gets to play his own muppet in Jeff, Who Lives At Home .

Unemployed, unmarried, Segel’s amiable Jeff is a 30-year-old who lives in his mother’s basement, smokes pile of pot and counts running an errand to the DIY store as an achievement.

He’s also obsessed by M. Night Shyamalan’s Signs – so much so that when he picks up the phone and gets a wrong number, he takes the dialler’s request to speak to “Kevin” as a message from a world beyond our own.

No wonder mother Sharon (Susan Sarandon) is worried – though she has her own issues, what with an anonymous admirer flirting with her at work.

Set across one day, the ambling plot plays out like a particularly baggy detective story, with Jeff following a kid called Kevin he spies on the bus (only to get mugged for his trouble); Jeff and his brother Pat (Ed Helms) attempting to catch the latter’s wife Linda (Judy Greer) in the throes of a suspected affair; and Sharon turning amateur sleuth in a bid to uncover her fan.

It’s written and directed by mumblecore auteurs Jay and Mark Duplass, who dipped a toe in the mainstream with 2010’s Cyrus . Jeff feels slight by comparison. With only sporadic laughs, it relies on Segel’s ample charm, but he’s hard-pressed to carry a film that, even at a short-and-sweet 83 minutes, edges close to outstaying its welcome.

Despite being two of the best indie actors around, Helms and Greer don’t add a lot (as the angry, goatee-wearing, Porsche-buying, mid-life crisis sufferer, Helms feels miscast). Sarandon’s subplot offers grace notes, and she even gets a Thelma & Louise moment.

But still, you may walk out thinking you’ve seen something more akin to a first-draft doodle than a fleshed-out film.