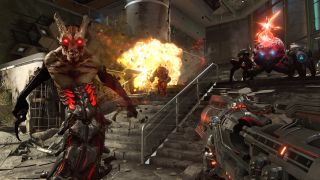 It's not true that all sharks will die if they stop moving. Some have muscles in their mouths which pull in water for respiration even while still. But we can presume the Doom Slayer doesn't. His only means of survival is to circle constantly, pulling air from the throats of imps and revenants, only slowing once the arena of battle is slick with blood. See Doom Eternal in action, and it's clear none of that has changed since 2016. But the battlefield itself has, becoming brighter and more garish.

Perhaps it's because of Quake Champions that id Software has made in the interim, but the killing fields of Doom Eternal's campaign look like multiplayer maps. Weapons no longer lie on the ground waiting to be picked up but spin in mid-air, sheathed in an acid green coating. Corked potions litter the surface of Mars, filled with a health-giving blue liquid, while destructible walls are marked with luminescent cracks – like the egg in the famous Alien poster. The jump pads that were once restricted to facilities of the Union Aerospace Corporation, where they might feasibly have been used in industry, are now used liberally in level design. They glow oddly against the brimstone.

More garish still are the new icons hovering in the world. They scream with text like 'DASH REFILL' and '1UP' – the kind of literal design you might expect from light-gun shooters in the arcades. It's as if id is taking every available opportunity to remind you that you're not on Mars, actually – that this is all just a game. While 2K's president is busy telling the world that we're only one console generation away from games that "truly look like live-action," Doom Eternal is almost perverse in its rejection of naturalism. It's not a sign that id has lost the plot, however – rather that the studio has a stronger sense of self now than it has in many years.

The instinct behind immersion

It's the instinct of developers to hide the boundaries of their worlds. They, like many of us, prize immersion, the sense that a game is so real that you might just trip and fall into it. It's the same instinct that drove the push to VR, and before that the push to 3D, with Wolfenstein and Doom.

In some ways, though, it's a wrongheaded approach. In the '90s and '00s, the frustration was invisible walls. See that mountain in Skyrim? You can climb it. Unless, of course, said mountain lies beyond the borders of Tamriel's mythical country – in which case you'll meet an impenetrable force field before you reach it. Today, you're more likely to be told off for leaving the mission area, and given a handful of seconds in which to return before the game pulls you back with a jolt.

It's not that devs ought to be building landscapes of infinite scope – but if they're honest about the limitations of a game world, they can make it a strength rather than a crutch. Doom has always been that way. The original games, built-in John Carmack's revolutionary id Tech engine, had you pushing at the walls. Sometimes they'd give way, revealing secret caches of ammo or – with the help of cheat codes – the severed head of a designer. Often a button or unseen floor trigger would flatten a corridor or lift a path from a pool of lava, reshaping the environment before your eyes. The possibility of transformation compelled you to know every inch of the map, to find all of its caves and cul de sacs.

In Doom 2016, id turned that drive into an explicit playstyle. Pulling chips from the Praetor Suits of elite guards allowed you to upgrade your own. Instead of increasing your dexterity and environmental resistance, you could double-down on 'area-scanning technology', deepening the detail of your automap, or causing your compass to pulse when secrets were nearby.

The map screen itself catalogued found secrets in the same way the modern Mario games do – showing them in sequence, so that you could work out which point in a level was hiding an elusive set of armour or Doomguy doll. Most elusive of all were the chunks of classic Doom levels embedded in the maps, opened only via levers buried in shadow.

In my case, this codification of secrets has led to an obsession with Doom exploration that, at times, has been to the detriment of my own enjoyment. I've spent many more hours searching in the quiet of abandoned UAC bases than I have fighting the finest battles the FPS genre has to offer. But it's an important part of Doom's power fantasy – not just to beat all the enemies, but to completely own a space, the way you never could as, say, a vulnerable SAS soldier in Call of Duty 4: Modern Warfare's All Ghillied Up.

Doom Eternal promises to spread this exploration upwards, combining the existing double jump with a Rage-style dash that can be activated mid-flight, as well as a grappling hook and swing points straight out of Prince of Persia. These are spaces to explore as much vertically as horizontally. If I get my way, I'll hit the skybox, and see what happens when I push there.

Of course, Eternal will pull us through an immersive vision of heaven, hell, and the demon-corrupted Earth in between. But at its best, Id has also accentuated the fact that its levels have limits, littering its borders with strange possibilities and things to find. The studio's most exciting secret is the one that powers its level design: it's only as you acknowledge your boundaries that you can truly start to play within them.

Doom Eternal has been delayed to March 2020. Sadly, we'll have to wait a few more months to get our hands on the final release, but in the meantime why not read our latest Doom Eternal hands-on impressions.