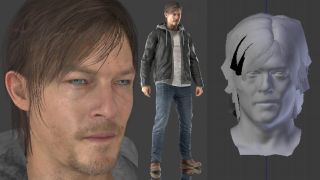 P.T. will always be an unanswered questions: what could Hideo Kojima and Guillermo del Toro done with Silent Hills?

While we’ll never know after Kojima and Konami’s relationship spectacularly imploded, dataminers have recently cracked open the demo’s files and are starting to pull out all sorts of unearthly delights that hint at the fresh hell that pairing could have unleashed.

Things start easy enough with the character models for Norman Reedus, who would have starred, along with Lisa, the gibbering twitchy ghost that haunted P.T.'s looping corridor.

Lisa files give us a chance to see her in a little more blood crusted detail:

Then there's Norman, who only really appeared as the 'surprise' reveal on completing the trailer. Considering that, he's quite well modelled compared to his screen time.

And, as we've seen from this video, these models have been imported into MGS 5 and brought to very disturbing life

One person even found the in-game animations. You couldn't actually see these in the demo unless it was a shadow, which is why they've used a Snake model here to bring them to life:

However, digging deeper uncovers a lot more interesting things. Like, for example: most thought the final scene at the end revealing Norman Reedus' character was a video but it was real time and in-engine.

This poster also found that beautifully modelled Norman Reedus was very basically animated to bring the scene to life: "I exported the only cutscene, and its just 3 versions of player walking forward, sometimes looking left (at the lamp) and back (at the camera). Cars are also in that animation, with all EFX and SHADER tracks rendered in real time."

Other finds seem to include other objects from the end scene:

Although there's one anomaly which as its discover says, is "actually not from the ending. Maybe I don't understand what is this."

We'll know more if it's extracted but it's possible it could be a water tank rather than, you know, a tank, tank.

The entire street has also been extracted.

However, this is where it gets REALLY interesting

There are two monsters hidden in the demo that no one has seen before. Well, almost. This extended, disfigured figure actually appeared in an early concept trailer for the game. It's actually a lot bigger than you think, using its distorted shape to fit through corridors like a horrific snake made of limbs.

Clearly, whatever that was, it would have played a big part in the game. Possibly as a key pursuing entity.

Then there's this guy:

You can get a better look at him from this shot showing him imported into MGS 5 again:

...There may be clues about the story in the audio files

Whoever that guy is up there, he has a slight air of being a bit older. There's a hint of portliness to that powerful frame that suggest more age than muscle.

Why's that important? Well on top of all the models being extracted, all the audio has been pulled out as well, which you can listen to here. It includes some lines that couldn't actually be heard in the demo as it was released.

That's relevant because there are a lot of references to men, specifically fathers, breaking down and/or killing their families. For example, in one message about a man killing his pregnant wife and children, the dialogue mentions, "there was another family shot to death in the same state last month, and in December last year, a man used a rifle and meat cleaver to murder his entire family. In each case, the perpetrators were fathers."

There's also references linking this male violence to "a larger trend, such as employment, childcare, and other social issues facing the average family."

It makes sense with this theme of men hurting their families to have a figure like that unidentified monster that literally embodies masculinity. There's also talk of one of the men repeating a series of numbers (which were heard in the trailer) like "like he was chanting some strange spell."

One quote says the following:

"You got fired, so you drowned your sorrows in booze. She had to get a part-time job working a grocery store cash register. Only reason she could earn a wage at all is the manager liked how she looked in a skirt. You remember, right? Exactly ten months back."

Some people have hypothesized that this could be Norman Reedus' character and this line - apparently cut from the playable version - certainly seems to be aimed at the player/Reedus:

"You! What did you do? Right in front of everyone. I'm putting this on the news, you psycho. Murderer."

It could be the case that the player's character actually killed his wife, and that she was possibly pregnant. Hence, the chicken baby.

In Silent Hill's habit of creating a personal hell around its victims, maybe we would have seen Norman Reedus in a twisted world full of violent men, with the twist being that he was one of them. It would certainly explain Lisa, the ghost, and the fact that the deformed arm monster appears to be female.

One important question has at least been answered: there was nothing in the paper bag.

Sorry guys, the rustling paper bag that greeted you at the start of the demo doesn't have anything in it bar a couple of animation spines.

So what does it all mean?

It could all just be left over assets that Kojima Productions left lying around. However, perhaps the biggest possibility here is that the PT demo wasn't finished and might have had additional updates planned in a similar way to Resident Evil 7 Beginning Hour. That arm monster was shown reaching through a corridor in the early trailer for example, and PT is just one big corridor.

Plus the arm monster appears to be fully rigged for animation; ready to reach out for you.

The extra man-monster and snippets of dialogue also could, potentially, have been something that might have been activated or added via an update.

Well, we wait, basically. People who understand this stuff are slowly working through the files and extracting more, but it doesn't look like any new things have been found for a while. Instead, the effort currently seems to be extracting and rebuilding assets we've seen like the bathroom and the cutscene street.

If anything else turns up, I'll let you know.