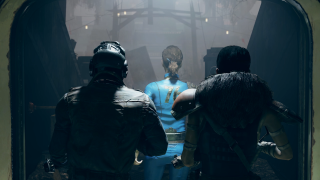 It's nearly here, Fallout folks: Bethesda is looking for testers to try out Fallout 76 Wastelanders.

Right now, Bethesda's only looking for "a small number" – later described as "a few hundred" – of PC players to get involved, but if you're keen, you only have until January 14 to sign up (which includes signing an NDA, of course, which prohibits testers from talking about or sharing what they've seen). The private test will then go live on January 17.

Fallout 76 Wastelanders is the upcoming expansion DLC for Fallout 76 that Bethesda hopes will reverse the disastrous launch, and the, er, less-than-smooth running of its online wasteland. Almost the entire purpose of Fallout 76 Wastelanders – which will be a free expansion across all platforms – is to add one of the most heavily-requested features: people, actual living human NPC characters with dialogue trees.

"We want YOU to join us in Appalachia to prepare for the arrival of Wastelanders," the developer said (thanks, VG24/7). "Starting January 17, we will be inviting a small number of Fallout 76 community members to experience an early version of Wastelanders. During this time, we are looking for you try out the new content, provide your feedback, and report the issues you experience in a Private Test Server (PTS).

"Currently, we are only looking for a few hundred players to join us in playtesting," it added. "While this means that not everyone who opts-in will be selected, we wanted to ensure that as many of our most active and experienced community members as possible have the chance to opt-in for consideration."

In other Fallout 76 news, be careful if numbers aren't your strong point. Math/s Camp is a new player-made trap in Fallout 76 where you need to do math/s to save your life. As Jordan recently reported, it's become common for Fallout 76 players to build "trap camps" for unsuspecting players to wander into and subsequently burn to death. Redditor Vault101manguy found the practice amusing but noted a distinct lack of "sport" when there's no way for the victim to escape alive. Thus, Math Camp was born.