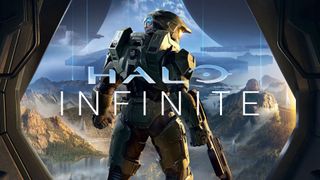 Post E3 2019, new Halo Infinite box art has surfaced and it might actually reveal more than the Halo Infinite E3 trailer. Who's in Master Chief's helmet, for example?!

First up the here's the full box art:

Obviously, the big thing to notice is the glowing chip in Master Chief's head. While the E3 trailer showed him inserting a chip he'd kept clenched in his hand while frozen in space, it didn't light up and clearly flashed the message 'AI not detected'. The trailer does seem to hint at Cortana being around in some way, and that glowing chip slot in the helmet definitely suggests someone's home.

There's plenty of other things to think about in the art as well. You can see several blue beams of light looking very much like mission markers (remember rescuing marines?). But, given how many there are here could it suggest an open world structure of some kind, with you having a choice in where to go more so than ever before? Even the framing of the art, in the open rear door of a Pelican, suggests you could be using it as a mechanic to drop into different areas for missions - Studio head Chris Lee has mentioned the the pilot in the trailer is a new character to the universe and a significant one within the game, so maybe he'll be ferrying you around the Halo ring that is teased in the trailer?

There's also some interesting structures - hexagonal tiling, pillars and towers that could be Forerunner hints, or something else entirely. The Halo ring also seems to be in the middle of being assembled, given the glimpse of structures underneath it and the huge floating chunks apparently in transit. Are these repairs, given the ring was seen shattered in the trailer, or something else entirely?

Given how secretive Microsoft are being it's likely going to be a while until we find out more but set the speculation engines whirring and let's see where it takes us.